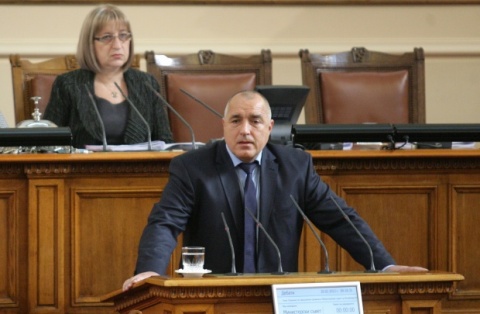 Borisov made the shocking announcement Wednesday that his cabinet is to resign en masse around noon. Photo by BGNES

Bulgarian Prime Minister Boyko Borisov has declared that he does not intend to work any longer with Finance Minister Simeon Djankov.

Earlier on Wednesday, Djankov,  whose shocking dismissal earlier in the week was only to be followed by the resignation of the whole center-right GERB government, had claimed that he remains in office.

"My resignation has not bee voted by the parliament yet, so formally I continue to serve as Bulgaria's finance minister. It will be my aim over the next few weeks and months to work with Prime Minister Boyko Borisov, so that at the next elections GERB may win full majority and rule one more term," Djankov told reporters.

However, the Prime Minister begged to differ.

"Deputy Prime Minister and Finance Minister Simeon Djankov resigned and I accepted it, proposing to the MPs to dismiss him," Borisov said.

"This was my decision and I have not changed my mind," he added.

Borisov declared that Djankov will not be included in a potential new GERB government.

Borisov made the shocking announcement Wednesday that his cabinet is to resign en masse around noon. The move follows a series of mass protest rallies against high electricity prices that morphed into wider discontent over austerity and the way the country is being run.

Bulgaria's Parliament will vote on the Cabinet's resignation on Thursday, it has been made clear.