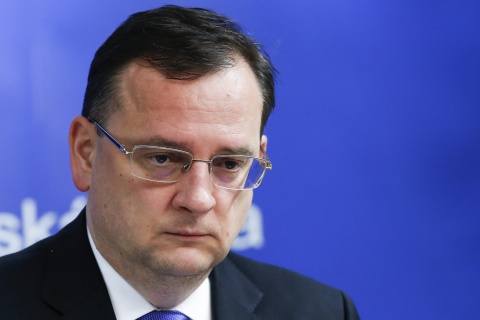 Czech Prime Minister Petr Necas addresses a press conference at the end of the European council meeting, at the European Council headquarters in Brussels, Belgium, 08 February 2013. Photo by EPA/BGNES

Czech Prime Minister Petr Necas has argued that a potential withdrawal of the license of energy company CEZ for Bulgaria would be a strongly politicized step ahead of the forthcoming parliamentary elections in the country.

Necas, as cited by local news agencies, explained that he would seek an explanation from the Bulgarian authorities for such an unprecedented measure and would also consult the General Director of CEZ on the matter.

Commenting on a wave of nationwide protests over high electricity and heating bills, Bulgarian Prime Minister Borisov said at a press conference earlier on Tuesday that the license of CEZ would be revoked by the end of the day.

In a bid to appease growing public discontent, he also suggested that electricity prices could drop by 8% from March 1 if the State Commission for Energy and Water Regulation (DKEVR) approved the proposal of the government.

The past ten days in Bulgaria have seen mass protests in a number of cities over high electricity and heating bills.