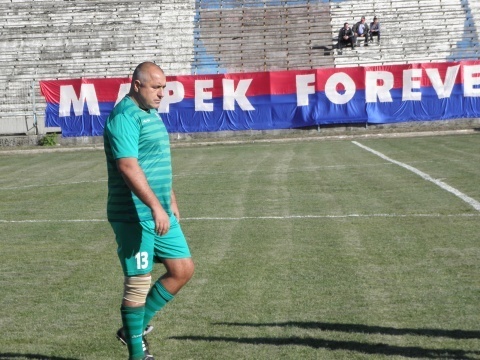 Bulgarian PM Boyko Borisov is a passionate football fan and an amateur player. Photo by BGNES

Bulgarian Prime Minister Boyko Borisov was apparently not worried by the fact that tens of thousands protested against high electricity bills on Sunday.

Upon asked why he "disappeared" for three days while the protests unfolded. Borisov informed reporters about his activities:

"I did not hide. I spoke for Nova TV on Saturday, while Sunday is a day off and I played football," he said.

"Now you are going too far," Borisov angrily told reporters.

The largest protests so far were held over the weekend and Monday evening when tens of thousands of demonstrators gathered in the capital Sofia and the other major cities in the country. Venting their anger at high electricity bills, the protesters demanded the resignation of the cabinet and the renationalization of power distributors.The rallies in downtown Sofia Monday evening were marked by clashes with riot police, which continued for over 4 hours with policemen chasing demonstrators on Sofia streets.

Addressing a press conference on Tuesday, Borisov vowed to revoke the license of the local unit of Czech power utility CEZ to operate the country's national grid by the end of the day.

The protest rallies against high utility bills and monopolies are continuing Tuesday.