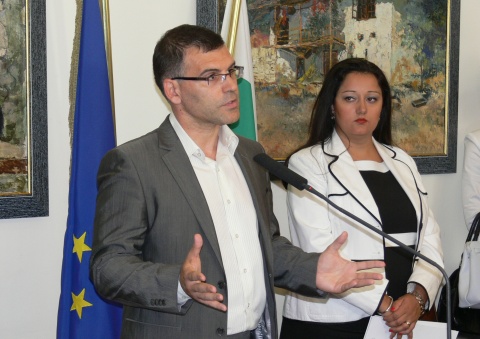 Regional Minister, Lilyana Pavlova (r), who is the highest rated minister in the Cabinet Borisov, is to replace Finance Minister, Simeon Djankov (l) as Bulgaria's Deputy PM. Photo by BGNES

It came on the heels of breaking news that Deputy Prime Minister and Finance Minister, Simeon Djankov, has resigned from the post.

Borisov is going to propose to the Members of the Parliament to vote personal and structural changes in the cabinet, the government press office further reports.

The PM is proposing to release Djankov from both posts – as Deputy PM and as Finance Minister.

Pavlova, who is the highest rated minister in the Cabinet Borisov, is to take over the Deputy PM duties, while the Minister for the Management of EU Funds, Tomislav Donchev, is to be elected Finance Minister.

Pavlova is to keep the Regional Minister post, while Donchev will hold two jobs.

The news stunned many Bulgarians as Djankov was one of the favorite ministers Borisov, and enjoyed his firm support all since the ruling Citizens for European Development of Bulgaria party, GERB, took office.

The PM often praised him locally and across Europe for maintaining strong fiscal discipline.

It also came after large-scale protest rallies against high electricity and heating bills took place across Bulgaria Sunday, with hundreds of thousands of outraged citizens taking on the streets.

The reshuffle happens just months before the general election and in the aftermath of an unseen so far number of other such dismissals and replacements.