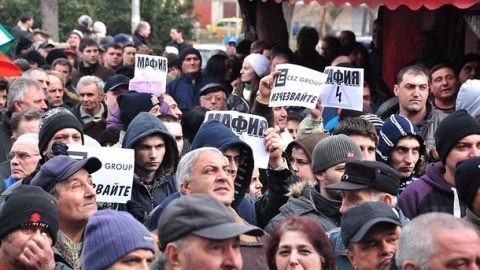 Mass rallies across Bulgaria escalated into anti-governmental protests calling for the resignation of the cabinet and chanting “Mafia”. Photo by BNR

Tens of thousands of Bulgarians protested in more than 20 cities on Sunday (17 February) against high electricity bills and called for Prime Minister Boyko Borissov and his centre-right government to resign.

Protestors shut down roads and intersections, hurled eggs and bottles at public buildings and burned their electricity bills, some shouting 'mafia'.

Electricity bills for January sparked mass outrage, news reports said. Many Bulgarians say that they are unable to pay their bills, which average more than €100. Bulgaria has the lowest average salary in the EU, €387 a month. The average pension stands at €150, and the base pension is €76.

The protestors accused three foreign-owned energy companies of raking in windfall profits and didn't buy the explanation that January had been an exceptionally cold month.

Many Bulgarians suspect complicity between the utilities and the government. During Sunday's "Let's set on fire the monopolies", demonstrators also protested against Borissov's government and the political class in general, Dnevnik, the EurActiv partner in Bulgaria, reported.

Polls show support for Borissov's Citizens for the European Development of Bulgaria, or GERB party, is declining. With parliamentary elections due in July, GERB was trailing the opposition Socialists led by Sergei Stanishev, who is also the leader of the Party of European Socialists.

Bulgarians blame Borissov for the decline of standards of democracy and media freedom since he took office in 2009, and for his inability to tackle corruption. In a recent debate in the European Parliament, Bulgaria was described as "the weak link" in terms of decline of democratic standards and a threat to European values across the continent.

Energy Minister Delyan Dobrev appeared in a hastily organised news conference on Sunday, promising to publish the utilities' agreements with the Bulgarian state. As these agreements are secret, reports say that the Bulgarian state has guaranteed them a profit of 15%. Also, according to rumours, the utilities report massive fictive activities, aiming at paying lower taxes.

Stanishev stopped short of asking the re-nationalisation of the utilities, saying that he would insist that the Parliament look into the implementation of their privatisation agreements.

Riding the wave of public anger is the nationalist Ataka party, which called for the re-nationalisation of the utilities, and advised citizens not to pay their bills and to destroy their electricity meters.