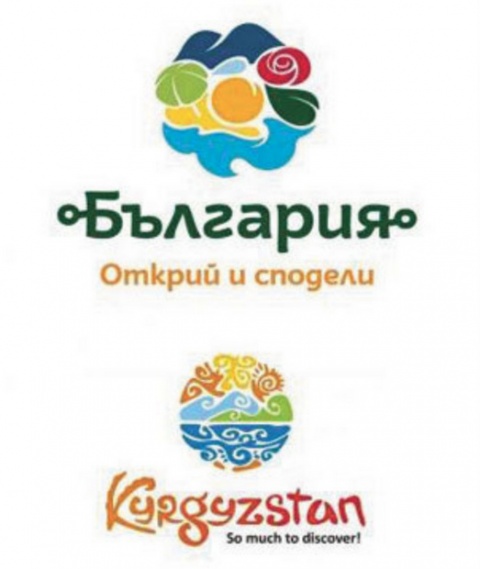 Bulgaria's new tourism logo, controversial as it is, has been found to mimic that of Kyrgyzstan (below).

Bulgaria's new national tourism logo, which has been widely criticized for its design, and was found to be mimicking Kyrgyzstan's, will be remodeled till "it's to the public's liking", Bulgarian Economy Minister Delyan Dobrev promised.;

"I hope that the refashioning of Bulgaria's tourism logo is already under way because I asked for that about 10 days ago," Dobrev said Thursday, as cited by the Focus news agency.

He did note that the firms that won the tender for drafting Bulgaria's new tourism logo in fact did their job because they fulfilled their contract.

"The contract stipulated that they have to carry out certain tasks. They carried out these tasks," the Economy Minister said.

He did note, however, that unless Bulgaria's new national logo is refashioned into a logo that Bulgaria could be proud of, he would see a way "to correct the sum paid for this product".

Meanwhile, Prof. Stoyan Zhelev, who was in charge of the project for logo, said that a total of 2 820 people polled internationally did like it, including 120 respondents from China and 100 international tour operators.

According to Aneliya Genova, Director of the Marketing, Advertising, and Tourism Information Directorate at the Bulgarian Ministry of Economy, Energy, and Tourism, however, the logos of Bulgaria and Kyrgyzstan do not look alike.

She said total price of the project for the new logo drafted by Prof. Zhelev and his team was BGN 1.348 M, and added that promotional information about the logo will be translated in 10 languages.

The procedure for granting the deal has now landed in the prosecutor's office for a check of possible breaches of regulation.