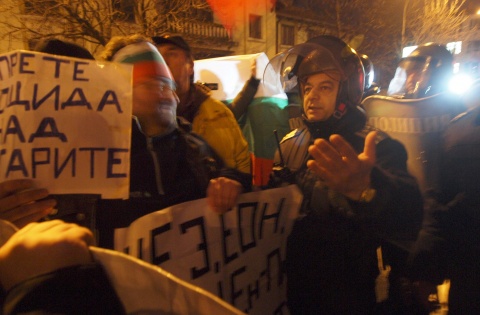 Wednesday's protest over high power bills was the most massive in Varna, with some 2000 – 5000 people chanting "Mafia" in the streets. Photo by BGNES

One of the leaders of a protest over the high electricity bills in Bulgaria's Black Sea city of Varna, Ivan Petrov, has been stabbed in the back late on Wednesday.

At around 9 pm, at the end of the protest, when the people were dispersing, Petrov, a former player of the Spartak Varna football club, was walking towards his car along the alley near the St Sofia church when he was hit in his back.

"I turned and I saw a hooded man running. The next thing I knew was that I had blood around my waist," Petrov told petel.bg on Wednesday.

After the incident, Petrov walked for around 50 meters, after which he stopped a car which took him to a hospital, where his wound was taken care of.

He was subsequently questioned by police.

Wednesday's protest over high power bills was the most massive in Varna, with some 2000 – 5000 people chanting "Mafia" in the streets.

Wednesday's rally was called under the motto "Protest for the right to be citizens in our own country" and was not only about the high prices of electricity.

Wednesday was the fourth consecutive day of protests in Varna over the high power bills.

The rally took place amid increased police presence but there were no clashes, unlike the previous day.