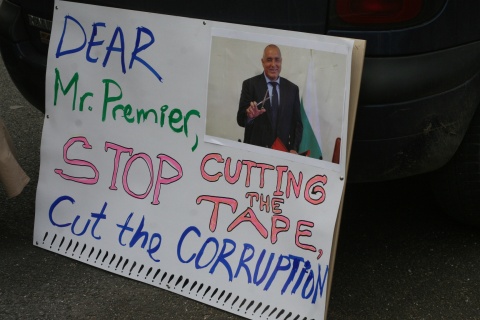 Over 100 people rallied Wednesday at the Yambol-Karnobat stretch of the Trakia Highway, which is under construction, demanding that they be paid their dues of around BGN 10 M. Photo by BGNES

Owners of land and companies involved in the construction of new sections of Bulgaria's Trakia and Maritsa highways have staged protests, demanding their long-overdue payments.

Over 100 people rallied Wednesday at the Yambol-Karnobat stretch of the Trakia Highway, which is under construction, demanding that they be paid their dues of around BGN 10 M.

The protesters demanded cooperation from the state for their attempts to claim their dues amounting to over BGN 10 M from the subcontractor PST Holding-Stara Zagora.

The disgruntled workers dug up a symbolic grave where they buried signs with the names of their companies.

Construction workers called on Bulgarian citizens traveling on the Trakia Highway to pay attention to the fact that they were passing over "the corpses" of a number of Bulgarian families who had been taken to their graves due to lifelong debts.

The protest of construction workers at Lot 4 of the Trakia Highway was guarded by scores of policemen and several patrol cars.

Back in October 2012, construction workers warned that they would stage protests and block the Trakia Highway because they had not received salaries for six months.

Meanwhile, representatives of 70 companies working on Lot 2 of the Maritsa Highway and Lot 4 of the Trakia Highway staged a rally near the Zimnitsa road junction, according to reports of the Focus news agency.

The organizers of the rally explained that they were protesting to demand overdue payments for periods of seven months to over a year.

The protesters informed that the state had refused to interfere, claiming that the matter involved unsettled intercompany payments.

The demonstrators, however, insisted that the main subcontractor working on the construction project had been selected by criteria drafted by the state.

The disgruntled workers informed that they had sent letters of complaint to the Road Infrastructure Agency, the Ministry of Regional Development and Public Works, and the Ministry of Transport, Information Technology and Communications, the Council of Ministers and the President's Office.

The workers said that they were not planning to stage radical protest actions yet because they believed in the rule of law.