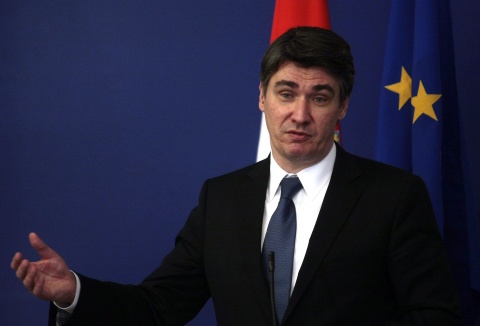 "Croatia will support Macedonia in every single respect, for Croatia has no unresolved issues with Macedonia," said Milanovic, after meeting Bulgarian PM Boyko Borisov.

End of 2012, Bulgaria and Greece blocked setting a starting date for EU accession negotiations with Macedonia, with the Bulgarian cabinet citing discrimination against ethnic Bulgarians in Macedonia, as well as outstanding issues in historical interpretation.

After Tuesday's meeting with his Croatian counterpart, Bulgarian PM Borisov said he had recently talked with Macedonian PM Nikola Gruevski over the phone, and that good progress is being made towards signing a friendship treaty, as desired by Bulgaria.

"Macedonia has for too long been placed in an unenviable situation regarding its membership in NATO and the EU," stated Croatian PM Milanovic after the meeting.

He was referring to years of blocking of Macedonia's NATO and EU bids on the part of Greece, which does not recognize Macedonia's official name.

"Croatia would not create problems on the way to EU membership to Bosnia and Herzegovina, Serbia or Montenegro either," added the Croatian PM.

Milanovic stressed that his country and its citizens would be delighted to see more people from Bulgaria and the former Yugoslavia visit Croatia, once it becomes an EU member.

Answering a journalist's question, the Croatian PM stated that his government does not favor any redrawing of the borders of Bosnia and Herzegovina.