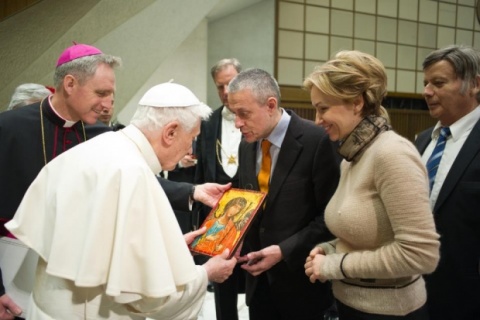 Just a week before the pope's shocking decision to resign, The Atlantic Club of Bulgaria was granted a papal audience by Pope Benedict XVI. Pictured Gergana and Solomon Passy. Photo by ACB

Blitz interview of Novinite.com, Novinite.bg and Novinite.ru with Dr. Solomon Passy, founder and President of the Atlantic Club of Bulgaria and former foreign minister, on the occasion of Pope Benedict XVI's surprise announcement that he will resign Feb 28.

Just a week before the pope's shocking decision to resign, The Atlantic Club was granted a papal audience by Pope Benedict XVI.

Solomon Passy is the founder and President of the Atlantic Club of Bulgaria, former Bulgarian Foreign Minister (in the government of Simeon Saxe-Coburg in 2001-2005), and Chairperson-in-Office of the Organization for Security and Cooperation in Europe in 2004.

What was your first reaction when you heard about the pope's shock resignation?

The Atlantic Club was the last Bulgarian group, which was granted a papal audience by Pope Benedict XVI. This happened last week.

Pope Benedict XVI's resignation was a stunning announcement and came as a surprise to us, as well as to the whole world. This is the first papal resignation in nearly 600 years, so this unexpected development is really a historic move.

How did the pope strike you during your trip to the Vatican a week ago? Did he look frail?

My first meeting with Pope Benedict XVI was about seven years ago and when I saw him now it was clear that time had left its mark on him.

The first audience, which the Atlantic Club received by Pope Benedict XVI, was in 2006. The delegation had prepared a special gift for the head of the Catholic Church. Pope Benedict XVI received a unique map of Livingston Island, drawn by Professor Lyubomir Ivanov.

When I recall our meeting back then and now, I must say the seven years have had their impact on his appearance. And yet his eyes sparkled, his reactions were quick and precise. Pope Benedict XVI said his strength is no longer adequate to continue in office, but I believe he is still suited to carry out his mission in a different way.

On behalf of the Atlantic Club you invited His Holiness to visit Bulgaria in 2014. Did you have high hopes that he will accept the invitation?

That was clearly an informal invitation as it is extended by a non-governmental organization. But judging by his reaction and the reaction of his aides, I was left with the impression that the pope accepted it with his whole heart.

The invitation of course remains valid for his successor.

In fact we have already made ??an action plan regarding our plans for his visit to Bulgaria, but apparently it will have to be adapted to apply to his successor.

The Atlantic Club has played a crucial role in developing the bilateral relations between Bulgaria and the Vatican. Which were the highlights?

Relations between Bulgaria and the Vatican went through some quite impressive and unpredictable twists. But let me go further back in time.

The Atlantic Club's first visit to the Vatican was in November 1994 when Pope John Paul II gave an audience of our delegation, which was quite impressive and included prominent Bulgarian intellectuals such as painter Svetlin Roussev, Toncho Zhechev, writer Yordan Radichkov. Football star Hristo Stoichkov was also part of the delegation.

I had a separate face to face meeting with a representative of the pope's cabinet. He assured me that Pope John Paul II has never believed in the so-called Bulgarian connection, but he won't say this at the Vatican, rather he wanted to come to Bulgaria to make the historic announcement.

So the Atlantic Club started working on inviting Pope John Paul II to Bulgaria. We set up a committee to invite him, then another one for arranging his visit. All these efforts were crowned with success eight years later during the government of Simeon Saxe-Coburg, where I served as foreign minister and was given more clout.

Amazingly everything happened just as we had expected.

In Bulgaria the Pope absolved Bulgaria of any blame for the assassination attempt against him in 1981. This sent an important and very positive signal to the world at a time when Bulgaria was trying to build its new image. Back then, in 2002, Bulgaria still did not have an invitation to join NATO or the date for EU membership.

That's why we asked him to bless our efforts. He duly did so and these goals turned into a reality, perhaps not only because of the blessing, but because of the work we had done.

In a gesture of gratitude to the Bulgarian people Pope John Paul II gave as a gift a church in the central part of Rome, which we have successfully managed since 2002.

But I regret to say that Bulgaria's relations with the Vatican have been neglected recently - rather by the Bulgarian side. This coupled with the fact that Bulgaria does not have a diplomat there for two years already, has led to a most unfortunate result. Bulgaria's ownership rights over the church have been questioned and I really don't know how much time it will take to set things right again.

So you think this must be the focus of Bulgaria's relations with the Vatican?

One interesting detail is that upon the departure of Pope John Paul II from Sofia I handed him a letter from Bulgaria, which asked him to consider the ordination of a Bulgarian cardinal.

Even though the catholic community in Bulgaria is not as large as the one in France, Italy or Brazil, I think that the election of a Bulgarian cardinal would send a strong signal to many other Slavic and Balkan countries. This could turn into an important national cause for Bulgaria to defend.

In my opinion this should be one of the priorities in the relations between the Vatican and Bulgaria.

May God give the pope health and strength to overcome the weakness that I hope will soon disappear. And of course we will be following with keen interest the election of his successor.