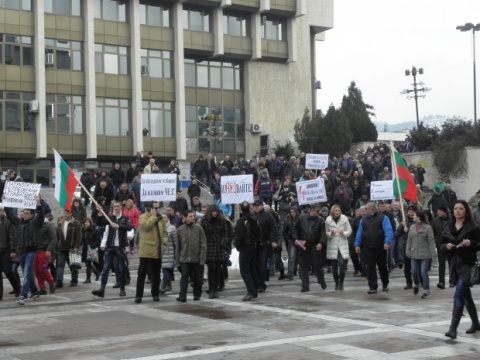 Enraged protesters threw snowballs at Bulgarian Economy and Energy Minister Delyan Dobrev in Sofia on Sunday, according to local reporters.

Dobrev was scheduled to meet with protesters rallying against skyrocketing electricity and heating bills this winter.

Some 500 people gathered in front of the Ministry of Economy and Energy, some of them shouting "Mafia!" and demanding Dobrev's resignation. Some of those involved in the protest hurled snowballs at the Minister.

At least 3000 protesters gathered in the southwestern town of Blagoevrgad, according to reporters.

Demonstrations also took place in Plovdiv, Varna, Sandanski, Silistra, Gotse Delchev, Belene, Shumen, Yambol, Veliko Tarnovo, Burgas, Montana, Dobrich, Kardzhali, and many other cities and towns. The protests were organized through social media after some consumers reported 100% higher bills in December compared to the same period a year ago.

Many angry clients of the power distributors in the country burned their bills in public, threatening that they would not pay.

Two vehicles owned by power distributor EVN were set on fire in the city of Plovdiv on the eve of the protests.

Power distributors CEZ and Energo-Pro have explained the higher bills for December with the different accounting period, the cold weather, the Christmas and New Year holidays, and the increase in electricity prices by nearly 14% from July 2012.

Energo-Pro vowed to publish detailed information about the electricity bills.

Bulgaria's Economy and Energy Ministry explained that an expert committee would examine the calculation of electricity bills of consumers of CEZ.