Bulgaria to Hand Over to Lebanon Report on Bus Attack – Diplomat 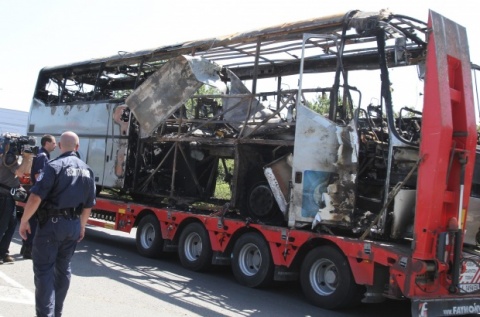 The bus bomb exploded on July 18 last year in the Bulgarian coastal city of Burgas by the Black Sea, killing six people. The victims included five Israeli tourists and a local bus driver. Photo by BGNES

Bulgaria is about to hand over to Lebanese authorities a detailed report on investigations carried out over Burgas attack, the Bulgarian Embassy charge d'affaires announced.

"Bulgaria pledged to Foreign Minister Adnan Mansour that it will hand over all the useful information to aid Lebanon in discovering the truth," Tzolov told the radio station.

He pointed out that the Lebanese state will be informed about the identities of the suspects via the report, which also includes the possible ways the state can help Bulgaria in this case.

Tzolov described the attack as a "hideous crime," stressing that his country is keen to reveal those who are behind the attack.

The cooperation treaty between Lebanon and Bulgaria in jurisdiction fields prompted his country "to consider submitting a request to Lebanese authorities to aid it in the case", the diplomat said.

However, he stated that the treaty doesn't stipulate that Lebanese authorities have to hand over the suspects.

Tzolov praised the stance taken by Prime Minister Najib Miqati who stressed that his government was "ready to cooperate with Bulgaria to shed light on the circumstances" of the attack.

Bulgarian Interior Minister Tsvetan Tsvetanov stated Tuesday that Bulgarian investigators had "a well-founded assumption" that the perpetrators of the deadly attack belonged to the military formation of Hezbollah.

The Australian is understood to have been living in Lebanon for six years before the blast.

Iran's Ambassador to Sofia vehemently denied allegations that his country participated in the bombing of a bus last year in Bulgaria that killed Israeli tourists.

"This (the attack) has nothing to do with Iran," Ambassador Gholamreza Bageri told journalists. "We are against any form of terrorism and strongly condemn such actions."

The bus bomb exploded on July 18 last year in the Bulgarian coastal city of Burgas by the Black Sea, killing six people.

No arrests have been made in connection to the blast.