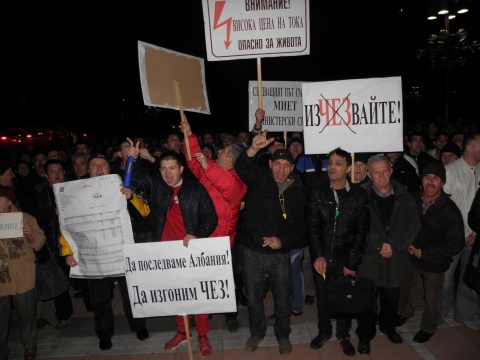 Over 200 citizens of Blagoevgrad staged a protest on February 4 against the higher December electricity bills. Photo by BGNES

Citizens of over 15 Bulgarian cities plan to stage protests over dramatically higher electricity bills for December.

Over the past few days, citizens of Blagoevgrad, Gotse Delchev, Shumen, Sandanski, and Petrich staged protests against the bills issued by power distributor CEZ, dnevnik.bg reports.

The angry clients of the company burned their bills in public, threatening that they would not pay.

A protest was also staged in Veliko Tarnovo, where consumers reported that their electricity bills for January 2013 were higher by around BGN 200 M compared to January 2012.

In Plovdiv, angry customers of power distributor EVN have decided to set up a complaints collection point in the heart of the city.

The point will be open from 11 am to 3 pm every day, starting Saturday, for one week.

The activists from Plovdiv demand a social contract with the power distributor.

Sofia citizens dissatisfied with their electricity, hot water, and heating bills, will gather Sunday in front of the building of the Ministry of Economy, Energy and Tourism.

Power distributors CEZ and Energo-Pro have explained the higher bills for December with the different accounting period, the cold weather, the Christmas and New Year holidays, and the increase in electricity prices by nearly 14% from July 2012.

Energo-Pro vowed to publish detailed information about the electricity bills.

Bulgaria's Economy and Energy Ministry explained that an expert committee would examine the calculation of electricity bills of consumers of CEZ.

Asked to comment on the matter, National Ombudsman Konstantin Penchev told bTV that electricity, heating, and water bills were unclear and people were unaware of what they were paying for.