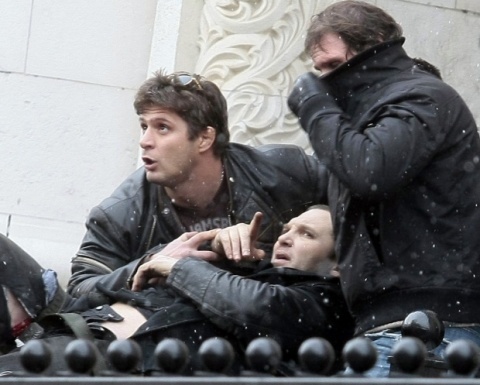 High-profile Bulgaria mobster Zlatomir Ivanov was shot in broad daylight on the steps of the main courtroom building in the Bulgarian capital last Tuesday. Photo by BGNES

The condition of notorious Bulgarian drug lord Zlatomir Ivanov aka Baretata (The Beret), who was shot on January 29 in downtown Sofia, is improving.

Ivanov is now conscious and breathing on his own, according to doctors from the emergency Pirogov hospital.

He has been taken out of artificially induced coma and from the respiratory system on Thursday.

For the time being, new surgeries are not required. He underwent one just days ago when his crushed leg has been stabilized with titanium plates and nails.

The tears in the abdominal area have been cleaned and stitched. The doctors are anticipating for the wounds begin to heal.

Last Tuesday, crime boss, Zlatomir Ivanov aka Baretata (The Beret, The Barret) was shot in broad daylight in the vicinity of the main courtroom building in the Bulgarian capital as he was going there for an appeals hearing in an illegal drugs distribution case against him.

After the shooting, Ivanov was taken to Pirogov and underwent surgery for approximately four hours and was later placed on induced coma.

One of his bodyguards returned fire and was wounded in the leg. He has been treated and released.