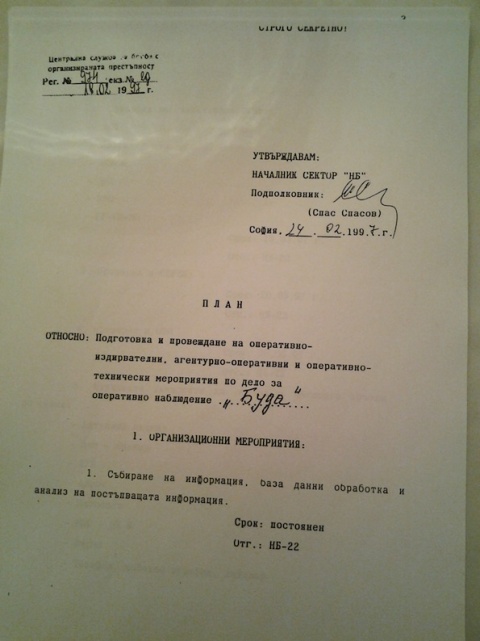 A photo by Bivol shows the top page of the blueprint for operative-search, secret-operative and operative-technical measures that has been applied for DON Buddha.

All documents from the file have leaked anonymously through Bivol's platform Balkanleaks, which is modeled after the famous WikiLeaks, and have been revealed for the very first time.

The latest revelations include 6 new documents from the case for operative surveillance (DON), codenamed Buddha, against Boyko Metodiev Borisov.

The documentation is a detailed plan for operative surveillance.

The plan is listed as top secret as it was the proposal to launch DON. The difference is that the proposal to launch DON has been logged in the Central Services for Combatting Organized Crime, CSBOP, on February 12, 1997, while the plan is dated February 18, 1997. Both documents have been signed by operative agents, Mladen Georgiev, (codenamed NB-22) and Ivan Yovchev (NB-20), and were approved on February 24, 1997 by lieutenant colonel, Spas Spasov. His name is the only one with a signature found in the documents.

The new batch of documents disprove claims of the PM and of his recruiter Mladen Georgiev that the interest of the anti-mafia police towards Borisov stemmed from the fact he was in the past the bodyguard of Communist Dictator, Todor Zhivkov, and of former Tsar, Simeon Saxe-Coburg.

A blueprint for operative-search, secret-operative and operative-technical measures has been applied for DON Buddha. According to it, first the secret services had to learn in detail everything about the subject in order to clarify his "priority criminal orientation." This involved collecting data from all secret services in the country, creating a psychological profile, applying several different special surveillance devices, SRS, and following the subject.

The following includes tracing and tracking all phone calls, all correspondence, all personal conversations of the subject and his every movement.

The data collection also includes reports on all connections and business partners of the said individual, "establishing the methods, the persons, and the intermediaries for penetrating the State structures."

The plan further requires establishing "Borisov's associations with powerful business organizations, the influence of these organizations, and the source of their capital; clarifying connections of the subject with people and businesses linked to criminal activities."

Bivol notes the above shows that this was a very serious operation, despite attempts to downplay it, stressing such actions are been undertaken only when there is sufficient preliminary information the subject could be indeed deemed a threat over his or her criminal ties.

According to the documents, after collecting all information, there were (and are in current police work) two options:

If there is evidence of criminal intentions, the surveillance case must be transformed into an operative work case or for "realization" (meaning arrest).

If there is evidence of conditions for "decriminalized" behavior of the subject, he must be recruited as a secret agent.

This leads to two versions. One is that Borisov, as he and Georgiev insist, was never recruited as a police informant since it has been established that he would not be as valuable over the "decriminalization;" the other is that the subject was involved in criminal activities at such large-scale that this would require further investigation and possible arrest.

The plan has been printed in one single copy. It has been coordinated with the chief of the group, Ivan Yovchev, (NB-20). Yovchev was later promoted to a Deputy Chief of the Terrorism Department. He left the system of the anti-mafia police in 2005, after Borisov resigned as Chief Secretary of the Interior to run for Mayor of Sofia. Yovchev began then working for private mining and construction businesses.

Mladen Georgiev (NB-22) rose in the ranks of the anti-mafia police from driver and auto mechanic in CSBOP to operative officer in its "Internal Terrorism" sector. Georgiev was later dismissed from this post by then CSBOP Director, Kiril Radev, on grounds of ties with organized crime groups only to become Executive Director of Borisov's private security company IPON. He is currently Chief Secretary of the State Agency for National Security, DANS.

The late Spas Spasov, whose signature is seen on the documents, has been chief of unit at the time they have been written. Since March 2000, Spas Spasov has worked in the management of a company linked to Alexey (Aleksei) Petrov – "Spartacus Security" Since 2005, Spasov was also a member of the Managing Board of "Spartacus Inter Holding – S.I.H.," and a majority stake holder in "Lev Corporation," which is also linked to Petrov.

Sunday and Monday, Bivol published the first two documents revealing that in the 90s Borisov has caught the attention of the anti-mafia police over his alleged ties with the underworld.

They show that on February 24, 1997, the CSBOP "Internal Terrorism" Department has launched a case for operative surveillance (DON) against Borisov. The case was listed under the alias "Buddha."

The earlier one, from December 1996, is a proposal to recruit him as a secret agent of CSBOP.

Initially, Borisov asked for the Buddha file to be declassified and denied having been an informant.

He also claimed that the police case for operative surveillance against him was launched because he has been a private bodyguard of Communist Dictator, Todor Zhivkov, and of former Tsar, Simeon Saxe-Coburg.

Borisov further explained that the codename Buddha stemmed from a scary incident in 1997, when the SUV of his then girlfriend, now top banker, Tsvetelina Borislavova, was blown up, and the police codenamed the case Buddha.

Borisov was backed by Stanimir Florov, Chief of the Main Directorate for Combatting Organized Crime, GDBOP, who said there were two cases codenamed Buddha – one over the incident with Borislavova and the other was the operative case.

Borislavova's SUV has been blown up in Sofia on March 27, 1997, over a month after the date of the launch of the operative case (February 24). Bivol explain the Buddha codename entered the file on the incident with Borislavova precisely because her boyfriend Borisov was already known to the services under this codename.

Bivol also note that because their platform is modeled after WikiLeaks, they don't know who the sender is and will never learn his or her identity, but all documents are being published after a thorough check and verification of their authenticity, confirmed by two independent sources.

Bivol is the official partner of WikiLeaks for Bulgaria.