Farage Replies to Ralitsa: "I Want to See Bulgaria Prosperous and Free" 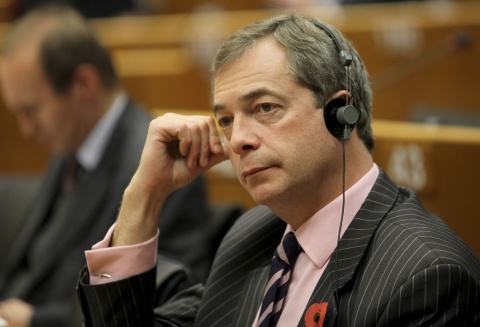 Ralitsa Behar, who lived and studied in the UK and chose to go back to Bulgaria and build a career here instead of the UK, had reacted to Farage's renewed criticism of Bulgaria in a bid to fuel fears over new immigrants, coming as of 2014.

Speaking on BBC's Question Time, Nigel Farage slammed Bulgaria as a country in a terrible state, where the judiciary is not independent and the mafia basically runs the economy.

Following is the full text of the reply that Mr. Farage sent to Novinite.com (Sofia News Agency) and Novinite.bg:

Thank you for your thoughtful letter and invitation to your country. I had planned to come this week but because I need to be in Brussels for an important European Council meeting I sadly cannot come. However, in my place I have asked my colleague MEP Paul Nuttall, the deputy leader of the UK Independence Party, to go in my stead. He shall be in Bulgaria on a fact-finding mission from Wednesday to Friday this week.

I am pleased my comments have helped create a debate in Bulgaria, a proud country with many well-educated people and much to celebrate.

You are right to love your country Bulgaria, as I love mine, the United Kingdom.

I love my country, but it does not mean I hate yours. I know many fantastic Bulgarians and I have no desire to dislike or disparage the wonderful people of Bulgaria.

Indeed, I have been delighted to welcome Bulgarian MEP Slavi Binev into our political group in the European Parliament where I am a Member.

It is great for you that you have been able to come to the UK and avail yourself of a free university education and free healthcare funded by the British taxpayer. Am I right to presume that your family are wealthy by Bulgarian standards so they can afford to pay your living expenses abroad for a long number of years?

I am sure you will agree that many Bulgarians have chosen or been forced by hard circumstances to leave the country they love and never return to live there, so you are quite exceptional in that you can choose to return to your homeland and be once again with your family and friends.

After the entry of a number of European countries to the EU in 2004, over one million have come to live (and many to work) in Britain. As you can imagine and no doubt witnessed the large influx of people over a short period of time has caused severe strain on our tax funded healthcare system, on our social welfare system, and caused a huge demand for more housing.

Many British people are justly uneasy about the character and culture of their cities, towns and villages being radically changed without them being asked or without giving their consent.

Please be assured that the UK Independence Party is completely opposed to all forms of racism and sectarianism.  But this matter of mass immigration has nothing to do with race or religion, it simple economics.  The UK cannot afford to accommodate every person who wishes to come. Polish is now the second most commonly spoken language in the UK.

I am sure Bulgarians love their country. How would your people feel if at the accession of, let's say, Turkey to the EU in the near future, one million Turkish migrants came to live in Bulgaria? Would the people of Bulgaria really be happy about that? Would you really be happy, that without your consent, one million migrants took advantage of your welfare and healthcare system at the expense of the Bulgarian taxpayer? I think not.

If I simplify things and mistakenly say the monthly pension in Bulgaria is 100 euros or 138 euros, it matters very little in the large scheme of things.  When compared to many western parts of Europe, Bulgaria is a much poorer country. This is not an insult, as you suggest, but a fact. (We shall look at the reasons why Bulgaria is poor later.)

When there are open borders and large divergences in wealth and opportunities between two countries there is usually largescale emigration. That is a simple fact and has certainly been the British experience post 2004. The naive or misleading politicians who said it would not happen before 2004 have been proved completely wrong.

In your letter you pass very quickly over very important issues. You wrote: "I understand our problems with our government, our law system, our education and healthcare systems."

I salute the Bulgarian people for throwing off the shackles of the oppressive Communist system and taking a new constitution in 1991. I say this as a good friend of Bulgarian people who wish their country to be prosperous and free.

I have been informed by Mr Binev that many "former Communists" still occupy top positions in your political system.

It is not I , but the European Commission which has frequently criticised Bulgarian politicians for their corruption.

Franz-Herman Bruener, director-general of the EU's anti-fraud agency, Olaf, warned in a report that "influential forces within the Bulgarian government and or state agencies do not have an interest in seeing the punishment of anyone in the criminal gangs." (New York Times 15/10/ 2008)

The European Commission progress report on Bulgaria (18/7/2012) underlined the lack of convincing results on Sofia's efforts to stop high-level corruption and organised crime.

The European Commission said both Bulgaria and Romania had not produced convincing results in the areas of judicial reform, the fight against corruption and organised crime. It outlined that contract killings were still a major problem in your country.

The EU's policing agency Europol estimated the annual turnover of the twelve largest organised crime activities in Bulgaria is the equivalent of €1.8 billion.

Another European Commission progress report in July 2010 said that public procurements in Bulgaria and Romania are dominated by "political favoritism," continuously changing rules are enabling corruption and conflicts of interest that are rarely followed up by law enforcement authorities, while police and judges themselves are often prone to bribes.

Because I want Bulgaria to be prosperous and free, I want to speak to you straight, as a good friend.

The reason that many Bulgarian people are poor is because they are made so by a corrupt political class who profit at the peoples' expense.

MEP Slavi Binev has told me that what Bulgaria needs to prosper is free speech, a free press, the freedom to set up and conduct a business without manipulation, an independent judiciary, and for politicians to stop buying peoples votes with false promises. I agree with him entirely.

What mass emigration will mean for Bulgaria is a huge brain drain, when your bright and best educated young people will leave for Western Europe and your state will be the poorer for it.

Look at what has happened in other states such as Latvia where many towns have been drained of their lively and talented youth.

It is quite normal and rational that many Bulgarian people wish for a better life, but mass emigration out of Bulgaria to the UK is not the answer. Putting an end to political corruption in your beloved country is.

Yours in solidarity and freedom,

Leader of the UK Independence Party,

Co-President of the Europe of Freedom and Democracy Group in the European Parliament.