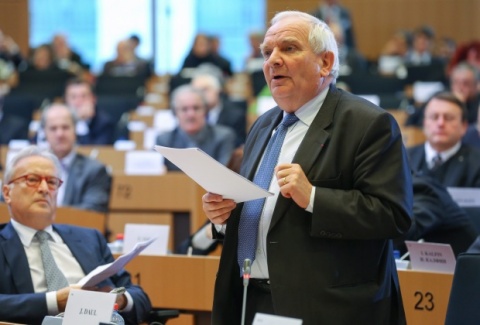 The leader of the EP group of EPP, Joseph Daul, congratulated the Bulgarian government for the successful probe in the brutal terror act at the Sarafovo airport. Photo by EPA/BGNES

The leader of the EP group of the European Peoples Party, EPP, Joseph Daul, voiced Wednesday serious alarm from the position of Bulgarian Socialist leader, Sergey Stanishev, siding with Hezbollah.

Daul spoke in connection with Stanishev criticizing the Bulgarian government's implication of Hezbollah in the Burgas bus bombing as poorly founded and imperiling national security.

Daul further congratulated the Bulgarian government for the successful probe in the brutal terror act at the Sarafovo airport in the Bulgarian Black Sea city of Burgas on July 18, 2012, stressing his party strongly condemned it, along with any such attacks.

The EPP Chairman voiced firm conviction the masterminds and the perpetrators of terror attacks must be tried in a court of law as terrorism is one of the most dangerous threats for peace, security, and stability.

Daul further supports Bulgaria's intentions to present the conclusions of the probe in the Burgas bombing before its European partners and pledges EU institutions will debate concrete measures to prevent such terror acts in the future.

The Bulgarian report, issued Tuesday, stated that the Lebanese organization Hezbollah may have been involved in last year's Burgas bus bombing

Bulgarian Interior Minister Tsvetan Tsvetanov said one day ago that Bulgarian investigators had "a well-founded assumption" that the perpetrators of the deadly attack belonged to the military formation of Hezbollah.

Tsvetanov revealed that a man with an Australian passport and a man with a Canadian passport were two of the three conspirators involved in the attack, which claimed the lives of five Israeli tourists, a Bulgarian bus driver and the one of the bomber.

The Lebanese Shi'a group Hezbollah has not officially commented on the news from Bulgaria.

The only reaction so far has been the posting on their official page of an article of Novinite.com reporting on Stanishev's comments. Stanishev is Bulgaria's Socialist leader, leader of the Party of European Socialists, PES, and former Prime Minister.

Bulgaria's ruling, center-right Citizens for European Development of Bulgaria party, GERB, is a member of EPP.