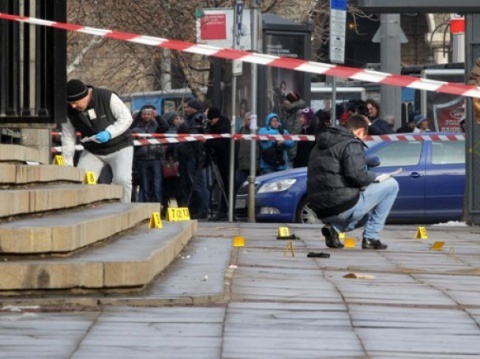 The entrance of the central courthouse in Bulgaria's capital became a crime scene after the shooting at convicted Bulgarian mobster Zlatomir Ivanov Baretata. Photo by BGNES

Bulgarian magistrates and other employees at the central courthouse in the capital Sofia have been terrified Monday after noticing a young man pointing a machine gun at the entrance of their building.

The Bulgarian 24 Chassa (24 Hours) daily writes Tuesday that many of those who occupy offices facing the main "Vitosha" boulevard ducked or peered from the side of their windows after seeing a man with a Kalashnikov, leaning on the windowsill of a rooftop apartment across the street.

This is the same apartment used by the shooter who fired one week ago at notorious Bulgarian mobster Baretata.

The shocked magistrates and other people inside the courthouse and in nearby buildings have been somewhat relieved only after seeing four other individuals behind the gunman, handing him different types of weapons and taking notes. At this point, the scared people realized the police have been conducting an experiment in reenacting the crime scene.

"I waited to hear shots, but did not. Then I peered through the window and saw that the gunman had moved and was aiming at the entrance again," an eyewitness told the daily.

Last Tuesday, crime boss, Zlatomir Ivanov aka Baretata (The Beret, The Barret) was shot in broad daylight in the vicinity of the main courtroom building in the Bulgarian capital as he was going there for an appeals hearing in an illegal drugs distribution case against him.

After the shooting, Ivanov was taken to the emergency Pirogov hospital and underwent surgery for approximately four hours.

One of his bodyguards returned fire and was wounded in the leg. He has been treated and released.

Baretata's life is reported to still be in danger, and he is on artificial coma.