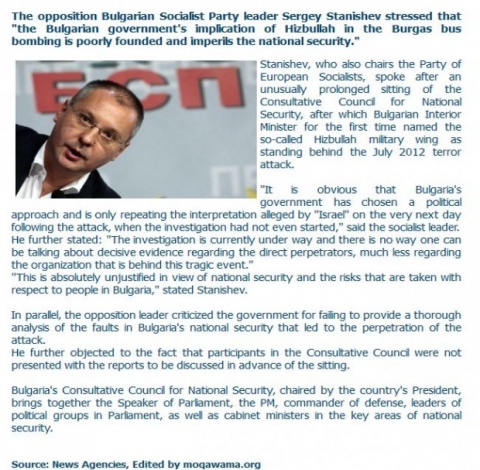 Screenshot of the article on Bulgarian Socialist leader’s comments on the Burgas bombing on the Hezbollah official page.

The Lebanese Shi'a group Hezbollah has posted on their official page an article of Novinite.com reporting on comments of the leader of the opposition Bulgarian Socialist Party, Sergey Stanishev, on the results of the Burgas terror act probe.

As the Bulgarian online information agency pik.bg noted Wednesday, the text on Stanishev is the only one in current news that mentions latest developments in Bulgaria and its position on the mastermind of the July 18, 2012 bombing at the Sarafovo airport in the Bulgarian Black Sea city of Burgas.

The official site of the Hezbollah movement lists the source as News Agencies (local), adding the article has been edited by moqawama.org.

However, except slight changes in the title, the lead, and some paraphrasing, the article is largely a direct reprint of the one of Novinite.com, published earlier Wednesday.

What is, however, even more intriguing is that the statement of Bulgaria's Socialist leader, leader of the Party of European Socialists, PES, and former Prime Minister of Bulgaria is the only one cited by the Hezbollah site, despite the flood of comments from a number of Bulgarian and foreign officials and terror experts.

The said statement criticized the Bulgarian government's implication of Hezbollah in the Burgas bus bombing as poorly founded and imperiling national security,

Stanishev's words came on the heels of the Bulgarian report, issued Tuesday, stating that the Lebanese organization Hezbollah may have been involved in last year's Burgas bus bombing

Bulgarian Interior Minister Tsvetan Tsvetanov stated one day ago that Bulgarian investigators had "a well-founded assumption" that the perpetrators of the deadly attack belonged to the military formation of Hezbollah.

Tsvetanov revealed that a man with an Australian passport and a man with a Canadian passport were two of the three conspirators involved in the attack, which claimed the lives of five Israeli tourists, a Bulgarian bus driver and the one of the bomber.

Hezbollah have not officially commented on the news from Bulgaria.