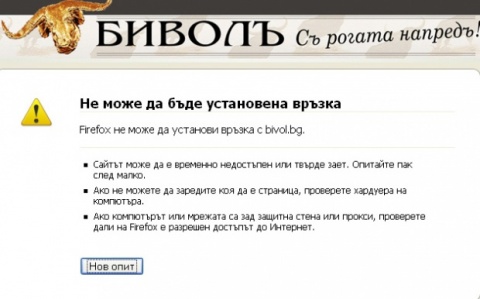 The site for investigative journalism Bivol was down for over an hour after a hacker attack.

The independent site for investigative journalism Bivol.bg which published formerly classified documents, revealing that Prime Minister, Boyko Borisov, has been a person of interest for the anti-mafia police in the 90s, became subject of a "flooding" attack.

One of the owners and editors of the site, journalist Assen Yordanov, told the Bulgarian news agency BGNES that Bivol has been attacked for over an hour by a very powerful, unknown site - anonine.com. The latter has generated tens of thousands of viewer requests, which had blocked access and brought the site down.

Sunday and Monday, Bivol published two documents revealing that in the 90s Borisov has caught the attention of the anti-mafia police over his alleged ties with the underworld.

The 1997 shows that on February 24, 1997, the Central Services for Combatting Organized Crime, CSBOP "Internal Terrorism" Department has launched a case for operative surveillance (DON) against Boyko Metodiev Borisov. The case was listed under the alias "Buddha."

The other one is a proposal to recruit him as a secret agent of CSBOP.

On Monday, Borisov asked for the Buddha file to be declassified and denied having been an informant.

The site is back and running, but it is slow.