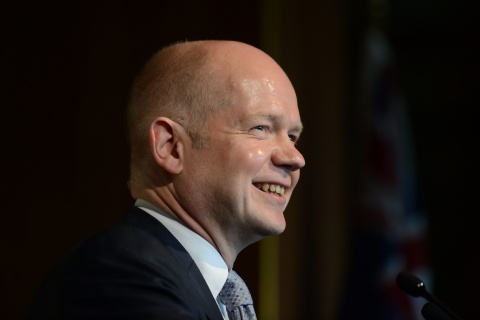 UK Foreign Secretary William Hague has lauded the Bulgarian authorities for their investigation of the Burgas Bus Bombing, a terrorist attack that killed 5 Israelis and 1 Bulgarian on the Black Sea coast on July 18, 2012.

Hague's statement came after the announcement made by Bulgarian Interior Minister Tsvetan Tsvetanov that two persons from pro-Iranian Lebanese group Hezbollah's military wing are behind the Burgas Bus Bombing, according to a report of the Bulgarian government presented to the Consultative National Security Council, an inter-institutional government body.

"The attack on a bus carrying Israeli tourists in Bourgas was an appalling and callous act of terrorism whose perpetrators need to be brought to account.  I welcome today's announcement by the Bulgarian Interior Minister, Tsvetan Tsvetanov, of the conclusions of the painstaking investigation carried out into this crime.  I pay tribute to the Bulgarian authorities for their excellent investigatory work," UK Foreign Secretary stated.

"The Bulgarian government has said, based on the detailed findings of the investigation, that there is a justified assumption that two individuals belonging to Hezbollah's military wing were involved in the bombing.  We call on the Lebanese government to fully co-operate with the investigation," he added.

According to Hague, it is important that the EU respond robustly to an attack on European soil.

"Every act of terror is an attack on our shared values.  In committing an attack, terrorists seek to undermine our resolve, but they should only serve to strengthen it.  The Home Secretary and I will be talking to our EU colleagues about the measures we can now take to continue to make our citizens safer," the British Foreign Secretary concluded.