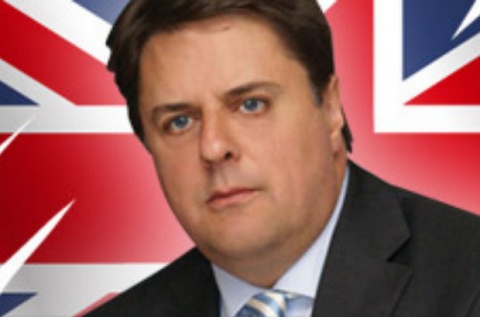 An exclusive interview of Novinite.com (Sofia News Agency) and Novinite.bg with Member of the European Parliament and leader of the nationalist British National Party Nick Griffin on the issue of Bulgarian and Romanian migrant labor in the UK.

Would you say there is an anti-immigrant paranoia in Britain at the present moment regarding the upcoming lifting of the labor ban for fellow EU citizens from Bulgaria and Romania as of January 1, 2014?

I don't think it's paranoia because paranoia is an irrational feeling. In Britain where the average wages have been trimmed down, and there is very high youth unemployment in particular concern about bringing in further cheap labor is rational and is no paranoia.

A report of the European Commission found that immigrant labor from the eight post-communist EU states that joined the Union after 2004 contributed 1.2% of Britain's GDP in 2004-2009. Do you agree that migrant labor actually boosts the British economy?

Immigrant labor might help the economy, and I say "might" because it is not certain that it necessarily does. But the nation is not about its economy, its primarily about its people. You can have a huge economic boom but if the indigenous people are left out of that, what is the point of that?

As nationalists, we are not primarily materialists. There are more important things than money such as the freedom, security, and rights of our own people. This is equally important for nationalists in Britain, France, or Bulgaria.

Bulgarians and Romanians seem to be constantly vilified in Britain by the press, especially the English tabloids as well as by the certain politicians' statements. Why do you think that is?

I think you are right. The tabloid press is concentrating on Romanians and Bulgarians. I think the reason for that, fundamentally, is that they are white Europeans.

The biggest problems in the UK are with Muslim immigrants from the Indian subcontinent from Pakistan and places like that.

The public is angry about that – there has been no debate on immigration in Britain in 30 years so when there is one part of the immigration problem they can talk about, people are eager to talk. That's why they are concentrating on Eastern Europeans – because it is not politically incorrect to talk about the problems with them.

It is indeed a little unfair to concentrate on Bulgarians and Romanians. Because of the economic crisis and the wage and employment problems in Britain, anybody coming in is a problem.

But I think it is also important to realize that there is a completely different angle to this. I understand why Bulgarians and Romanians are worried by the way they are being presented in the UK.

However, the real problem for Bulgarians and Romanians is not their right to migrate and get a job in Britain.

The real problem is the brain drain of very well-trained young people, which is a very challenging problem. When they leave to get jobs in countries like Britain, this is inevitably going to harm the infrastructure and well-being of people in Bulgaria.

I was speaking to this MEP from Bulgaria, whose son works as a consultant in a hospital in Sofia. And in the past year he has lost three of his four specialists who took jobs in Britain.

This brain drain is bad for countries such as Bulgaria and Romania and it is bad for Britain because the influx of these skilled laborers drives down the British wages.

Have you been to Bulgaria?

No, but I am hoping to visit this year. But I have many Bulgarian friends. Some years ago I worked for two summers picking vegetables in the agricultural part of England, where I was teaching English to various Eastern Europeans, including many Bulgarians, and we became very good friends.

I have nothing against Bulgaria at all. But I think that for a country already facing a demographic crisis and severe infrastructure problems, the leaving of many skilled workers such as nurses and doctors is catastrophic.

The UK migrant labor ban for Bulgarians and Romanians caught the attention of the public in Bulgaria after a statement by the leader of the UK Independence Party, Mr. Nigel Farage, who said Britain must keep closed its labor market for them after January 1, 2014, while painting a very negative picture of life in Bulgaria. How is the position of your British National Party different from that of Mr. Farage's UKIP? It's another nationalist party and your positions sound similar?

I will say that Mr. Farage's party is essentially xenophobic. They don't like foreigners. Whereas at the British National Party we love our own country. We can understand the position of Bulgarians and why they are upset by these comments.

I think that Mr. Farage and the British press are missing the point to be saying that opening the labor market to Bulgarians and Romanians will mean influx of a lot of unskilled labor, and criminals.

The problem is that there is going to be a wave of new migrants who in many cases are very skilled laborers. For example, the health service in Britain is being steadily privatized, which means that the influx of a lot of skilled labor will drive down wages in the British health service, and will dry out Bulgaria's. This is going to be bad for both Britain and Bulgaria.

The point that Mr. Farage and the UKIP are making sounds very similar to a more famous far-right politician from Western Europe, Dutch nationalist Geert Wilders and his Freedom Party. Do you think that is the case?

I think that Farage and Wilders are similar but Farage is ignoring even more the real problem of immigration, which is Muslim immigration.

The immigrants from Eastern Europe are not so unsettling for the British working class because these people are Europeans, they are Christians in culture and heritage.

But the issue of their migration is being used to raise the question about the real immigration problems because it is not politically incorrect to talk about them which is not the case when it comes to discussing Muslim immigration from former Third World countries.

The British National Party advocates UK's exit from the Union; why is that?

Yes, we do, and we always have, and we always will. We believe that the European Union was designed to become a one-nation superstate. This can only be done by doing away with the sovereignty and identity of countries such as Britain and Bulgaria.

The European nations' road to freedom and independence has historically been very hard, and it is wrong to give it away.

What is more, Britain is certainly losing huge amounts of money by being in the European Union. This money can be put to a much better use to rebuild Britain.

PM David Cameron promised the Brits a referendum on staying in the EU. What's your forecast for that referendum?

We don't believe there will be a referendum. Mr. Cameron will lose the next elections and he won't be in a position to organize the referendum that he promised. But what's more important regarding the referendum is that we had a referendum in 1975 on staying in the Common Market, the precursor to the EU.

However, big business poured a lot of money and the government also supported the "yes" vote. So if there is a referendum it would be rigged.

What is the British National Party's position on the movement for Scottish independence?

We believe that the drive for Scottish independence is largely encouraged by the EU because Britain is a geopolitical problem for the French and German elites dominating the European Union so the best way to weaken Britain is to break off Scotland.

Europe is a big family of nations, and that's why the nationalists raise the slogan of "Europe of 100 flags". We would like to see 100 flags in Europe rather than one blue and yellow-star flag.

We want cooperation between the European nations and we believe this is best done by each nation minding its own business and cooperating on things such as water and air pollution, trans-border crime, etc.

As we say in English, good fences make good neighbors. In other words, the best neighbor is the one that minds their own business.

I don't want to interfere in the affairs of Bulgaria, and I don't want French bureaucrats and German bankers interfering in Britain.