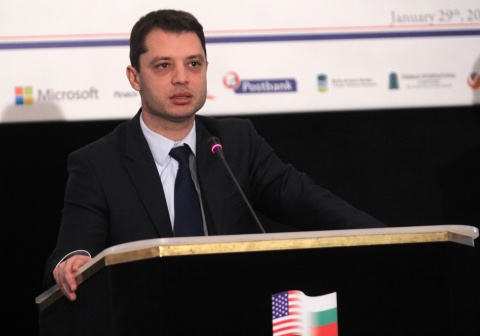 Economy and Energy Minister Delyan Dobrev has assured that the Bulgarian government has not changed its stance on the shale gas moratorium introduced in the beginning of 2012.

Speaking Tuesday at a conference titled 'Gas Perspectives: First Regional Gas Conference', he explained that the ban on hydraulic fracturing could remain in place for years on end until the public became convinced of the safety of the technology.

Dobrev's comments were triggered by claims of lawyers and gas production companies that the moratorium was unnecessary.

"It is understandable that law firms representing large consortiums defend the view that it must be lifted but this does not oblige government to take into account their demands," Dobrev stated, as cited by the Bulgarian National Radio (BNR).

He reminded that an ad-hoc parliamentary committee had been examining the best practices, inviting lecturers, listening to all interested parties, including environmental organizations, geologists, and international experts, for almost a year.

"There is no reason why we should not wait for years," Dobrev suggested, adding that the government would only reconsider its decision once it became fully convinced of the safety of hydraulic fracturing.

Dobrev went on to say that Bulgaria had two strategic goals as regards natural gas, including to develop local production and to diversify supply sources.

He emphasized that local output was 35% cheaper than imported gas.

The Minister of Economy, Energy, and Tourism noted that oil and gas exploration would substantially reduce Bulgaria's dependence on external suppliers in mid-term perspective.

Dobrev went on to suggest that the implementation of the Southern Gas Corridor would be essential for the diversification of gas supply sources.

He said that there were two options for the route of the Southern Gas Corridor – Nabucco West (via Bulgaria, Romania, Hungary, and Austria) and the Trans Adriatic Pipeline (TAP) through Greece and Italy, with the Shah Deniz 2 consortium expected to pick a scheme by end-June.

Dobrev argued that the better option for Bulgaria was Nabucco West, the scaled-down version of the Nabucco gas pipeline, adding that Bulgaria would strive to tip the scales in favor of the EU-backed project.

He said that one major advantage of Nabucco West was that it would provide access to a much larger market in the heart of Europe, while the route of the TAP pipeline crossed the periphery of the continent.