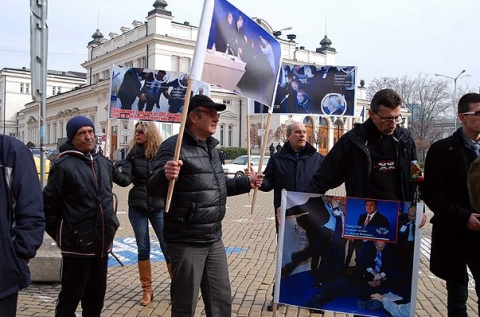 Just a handful of protesters gathered in front of Parliament in Sofia Saturday. Sofia Photo Agency

A few dozens of Bulgarians came out on rallies in 4 major cities to request that Movement of Rights and Freedoms delegates who severely beat up the assaulter of former party leader Ahmed Dogan face justice.

In contrast, an online petition to the same effect has already gathered more than 10,000 signatures.

January 19, while long-time leader Dogan was delivering a speach at an MRF congress in Sofia, 25-year-old Oktay Enimehmedov walked on stage and pointed a hand gun right at the politician's face.

Enimehmedov failed to produce a shot, and the weapon was later found to be a not properly loaded gas gun that could not kill the victim of the assault.

The attacker was promptly tackled by security and delegates, who then proceded to severely beat him, before security could lead him out of the conference hall.

Enimehmedov's bloodied face made rounds in Bulgarian and international media, provoking discussions as to why the security failed to thwart the assault and why the liberal party's delegates proceded to inflict a beating on the man, who was already disarmed and pinned to the ground.

Saturday protesters argued that just as the attacker was brought to face justice for the assault, so must be the MRF delegates who assaulted him, many of whom have already been identified.

Many ralliers stressed that although they completely denounce Enimehmedov's action, they do not see the delegates' actions as befitting civilized and law-observing citizens.

After the attack, the MRF conference continued, with Dogan, who had led the party ever since its inception in 1990, filing a resignation and aide Lyutvi Mestan chosen to succeed him.

Enimehmedov has said to investigators that his act did not intend to kill Dogan, but rather to be an act of provocation at what he saw Dogan's questionable and authoritarian leadership.

The liberal Movement for Rights and Freedoms, member of the EU liberael party ALDE, is known to be supported largely by members of Bulgaria's large ethnic Turkish minority.