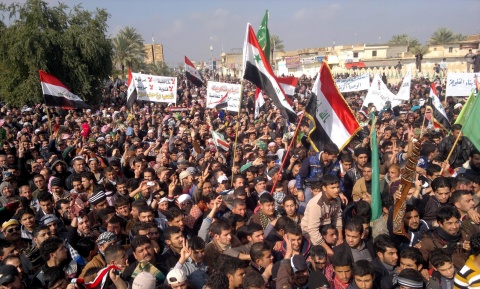 Tens of thousands protesters rallied against Iraqi Prime Minister Nuri al-Maliki in Sunni areas Friday as data showed a rise in attacks, indicating militants are seeking to capitalize on a prolonged political crisis.

The rallies came a week after eight demonstrators were shot dead by soldiers in the western town of Fallujah, dramatically raising tensions in what analysts have said is a markedly more dangerous stage of Iraq's perennial instability, international media reported.

Insurgents have sought to ride the wave of anger against Maliki and his government, with Al-Qaeda's front group in Iraq issuing an audio message on Thursday calling on Sunnis to take up arms.

Protesters gathered in Baghdad and several cities and towns in the mostly Sunni north and west, complaining of the alleged targeting of their minority by the Shiite-led authorities.

In Ramadi, capital of Anbar province which surrounds Fallujah, many protesters held up flags dating back to the rule of now-executed dictator Saddam Hussein.

In Adhamiyah, a mostly Sunni neighbourhood of north Baghdad, several hundred demonstrators resumed their weekly protest under heavy security measures at the Abu Hanifa mosque, calling for the release of prisoners they say are being wrongfully held.

The demonstrations were the latest in a wave of rallies that have continued largely uninterrupted since late December, sparked by the arrest of a group of guards of Finance Minister Rafa al-Essawi, a senior Sunni leader.

Maliki faces myriad problems, including vocal opposition from many of his erstwhile government partners less than three months before key provincial elections.

Officials claim to have released nearly 900 prisoners, and have pledged to raise the salaries of anti-Qaeda militiamen, while a top minister has publicly apologised for holding detainees without charge for prolonged periods.