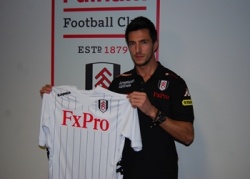 Fulham have completed the signing of Bulgarian defender Stanislav Manolev on loan until the end of the season.

The 27-year-old right-back, who has won 29 caps for his country, joins from Dutch club PSV Eindhoven, but Fulham also have an option to extend the deal by a further two years.

"I am looking forward to playing in the Premier League because I believe it is the best in the world," Manolev said, as cited by BBC

He added: "I know (Fulham manager) Martin Jol already because when I came to Holland, we played against Ajax when he was their coach."

Stanislav Manolev is born in Blagoevgrad, the hometown of his new teammate Dimitar Berbatov. They both started their career in local team Pirin Blagoevgrad.