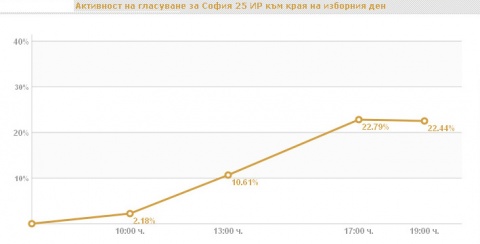 CEC data shows that turnout at the 25th electoral district in Sofia was 22.79% by 5 p.m. and decreased to 22.44% over the next few hours, instead of increasing. Photo by BGNES

Georgi Kadiev, Sofia municipal councilor from the Bulgarian Socialist Party (BSP), has drawn attention to a curious phenomenon in the results of the 27 January referendum on nuclear energy.

According to official data published on the website of the Central Electoral Commission (CEC), turnout at the 25th electoral district in Sofia was higher by 5 p.m. than by 7 p.m.

CEC data shows that turnout at the 25th electoral district in Sofia was 22.79% by 5 p.m. and decreased to 22.44% over the next few hours, instead of increasing.

In all other electoral regions, turnout statistics is logical, going up as hours go by.

No explanation has yet been offered for the anomaly recorded in Sofia.

The CEC announced the total turnout for the referendum, which was decisive for its validity, with an unprecedented delay on the grounds that it was trying to prevent any mistakes.

The official results of the referendum were announced Tuesday evening by the CEC.

According to a decision of the CEC date January 29, a total of 1 405 463 Bulgarian nationals cast ballots at the referendum out of 6 950 900 Bulgarians were entitled to vote.

The official turnout at the referendum was 20.22%, of whom 60.60% voted "yes" and 37.96% voted "no" to the question "Should Bulgaria develop nuclear energy through the construction of a new power plant?"

The referendum results mean that the issue of the construction of the Belene NPP or a new unit of the existing Kozloduy NPP will be returned to Parliament.

The decision of the CEC can be appealed within 7 days from its announcement to the Supreme Administrative Court (VAS).