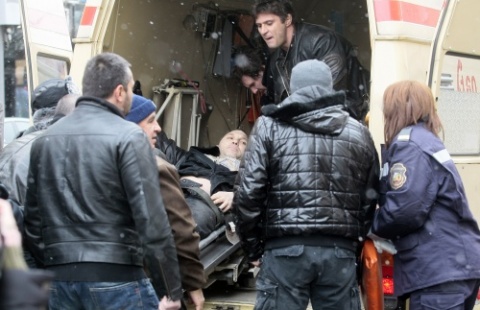 Bulgarian mafia boss Zlatomir Ivanov, aka Zlatko Baretata (The Beret), moments after he was shot and wounded before the Central Courthouse in Sofia, Jan 29, 2013. Photo by BGNES

High-profile Bulgarian mobster Zlatomir Ivanov, aka Zlatko Baretata (The Beret), who has shot in downtown Sofia Tuesday morning, is in a state of shock due to a heavy blood loss, medics have told reporters.

The surgeon who operated on Ivanov told reporters that the victim's colon, intestines and urinary bladder were infected. Ivanov was also injured in the leg.

The surgeon refused to answer a reporter's question on whether the infamous mobster's life was in danger.

The former member of Bulgaria's counter-terrorism squad, who became one of the best known mobsters in Bulgaria in the late 1990s, got 4 gunshot wounds at about 9:30 EET on Tuesday, as he was about to enter the Central Courthouse in Sofia for a hearing in a trial in which he is appealing an 8-year sentence for leading a drug dealing organized crime group.

One of the bodyguards of Zlatko Baretata was also shot and wounded during the shootout, in which the failed assassin, who was positioned on the roof of the Sofia Bar Association building across the street, managed to escape.