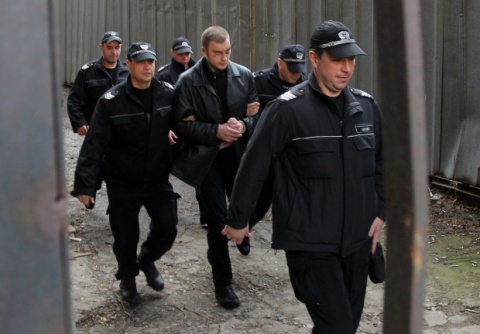 A group of nationalists, headed by the former leader of the extreme-right formation Bulgarian National Union, Boyan Rasate, rallied in support of the attacker of ethnic Turkish leader Ahmed Dogan.

On January 19, Ahmed Dogan, founder and leader of the DPS party ("Movement for Rights and Freedoms"), was the target of an attack right on the floor of a party conference by 25-year-old Oktay Enimehmedov, also a Bulgarian citizen from ethnic Turkish origin. However, the gas pistol that Enimehmedov pointed at Dogan's head misfired.

The nationalists gathered Tuesday in front of the Central Court building in downtown Sofia with signs such as "Bulgaria Is with You Oktay!" and "We support Oktay Enimehmedov!"

Rasate told reports Enimehmedov actions were a public outcry against the political system in the country that led it to a tragic and deplorable state.

"We think Members of the Parliament must face a Court of justice, not people like Oktay. These politicians have been destroying the economy for 23 years; they impoverished Bulgarians and forced them to emigrate. What we were and are subjected to is inhumane. We oppose DPS not because it is a Turkish party; for us it is part of the political elite detrimental to Bulgaria. We believe all these politicians must be jailed – Bulgarian and ethnic Turks," said he.

It was reported earlier that Rasate had made Enimehmedov a honorary member of his political formation.

According to Rasate, there are different ways one can protest, and Enimehmedov choose an unorthodox one.

Enimehmedov appeared for a Court hearing Tuesday to ask the magistrates to change his permanent detention to house arrest.

The trial was delayed by the shooting in front of the Court building of convicted top Bulgarian mobster, Zlatomir Ivanov AKA Baretata, but nevertheless started later.

Enimehmedov addressed once again the magistrates as Members of the Parliament (in Bulgarian it is Representatives of the People – editor's note), but this time he explained he used it because their verdicts start with "On Behalf of the People."

"We live in a democratic country where everyone is free to speak up. I don't think I am a threat to society and I don't plan to commit another crime. If you let me under house arrest, this would be great for my advancement since I could focus on my studies, and later finish my degree in architecture. Regarding what I did, different cultures have different values. I believe in Bulgaria's future. We are a small country, but we can still be the best," Enimehmedov told the magistrates.

On January 22, the Sofia Regional Court ordered permanent detention for the young man.

Enimehmedov pledged then he would not hide, but said he was worried about being killed if he would be let at large. He further stressed he hoped for a fair trial.

"I don't regret at all what I did. I did not want to kill Dogan, but to scare him, and I am only sorry that my gun misfired," said he.

The prosecution explained they wanted permanent detention on grounds Enimehmedov demonstratively threatened public order by brandishing a handgun and had a criminal past.

The Court-appointed defense lawyer countered he fully collaborated with the investigators, and plans to do so all along the legal proceedings.

DPS insist Enimehmedov has attempted political murder, which has been plotted by some other mastermind. They voiced suspicions of police reports the gas pistol used in the attack could not be deemed a murder weapon.

On the above ground, Enimehmedov was charged with making death threats and grave hooliganism, instead of attempted murder.

The prosecutor presented Tuesday copies from the questioning of Dogan, and DPS dissidents, Kasim Dal and Korman Ismailov, who split to form their own political party "Freedom and Dignity."

The magistrates' decision on Enimehmedov's arraignment is expected later Tuesday.