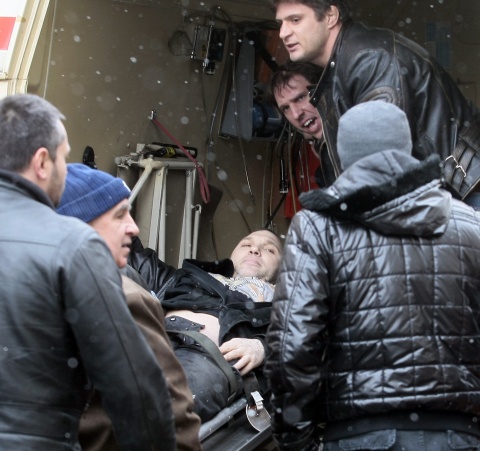 Zlatomir Ivanov, aka Zlatko Baretata, is being transported to the emergency room after he was shot and wounded before the Central Courthouse in downtown Sofia. Photo by BGNES

Alleged Bulgarian top crime boss, Zlatomir Ivanov aka Baretata (The Beret, The Barret) has been shot in downtown Sofia.

The incident happened around 9:30 am Tuesday in the vicinity of the Central Court building in the Bulgarian capital as Baretata was going there for a hearing.

According to several media reports, the shots came from an apartment across the Court building.

A huge fire is reported in the same building, housing apartments and several stores.

The Bulgarian Standard daily cites policemen saying they thought this was arson to cover up clues and evidence.

He has been shot in the leg and has been taken to the hospital. One of his bodyguards has been also injured. Again, according to eyewitnesses, the ambulance took 20 minutes to arrive.

Their lives are said to be out of danger.

The stairs of the Court building are covered with blood.

Mass police presence, including police officers and top police chiefs, is reported in the area which has been sealed.

The perpetrator or perpetrators, as well as the gun used, remain unknown.

Prosecutor Roman Vasilev, the Prosecutor in the case against Baretata, Biser Kirilov, and the judge, Rumyana Chenalova, are also outside, in front of the Court building.

In July 2012, Ivanov was sentenced to 8 years behind bars for participating in an organized crime group, illegal drugs trade, and for plotting the murder of Rumen Stefanov AKA Alf.