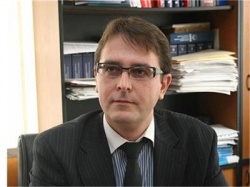 Sofia Prosecutor Alexander Nalbantov passed away at just 38 after losing a tough battle with pancreatic cancer. Photo by 24 Hours daily

Sofia district prosecutor Alexander Nalbantov has passed away after losing a tough battle with pancreatic cancer. He was 39.

Alexander Nalbantov is survived by his wife and two little children.

Prosecutor Nalbantov needed expensive treatment abroad for which his colleagues pooled their efforts to raise money.

Speaking for an interview last year for 24 hours daily, he – half jokingly – said that he is hating Mondays and Austria's capital does not bring the good emotions that it used to after he started to get his chemotherapy in Vienna on the first day of every week.

His colleagues described him as a clever and capable young man, an excellent prosecutor and a good man, who brought innovations in Sofia District Prosecutor's Office and set an example to be followed.

May he rest in peace!