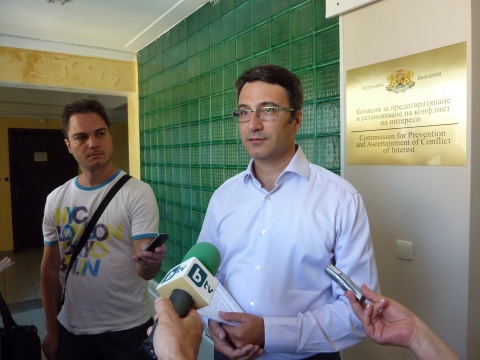 ormer Energy Minister Traycho Traykov has defined the January 27 referendum on the development of nuclear energy in Bulgaria as a "damaged item in democratic packaging." Photo by BGNES

Former Energy Minister Traycho Traykov has defined the January 27 referendum on the development of nuclear energy in Bulgaria as a "damaged item in democratic packaging."

"The question was actually do you agree to buy it and throw it out or buy it and then eat it," Traykov stated Monday in an interview for Nova TV.

He said that it was highly doubtful whether the referendum had brought profits for anybody.

Bulgaria's former Energy Minister suggested that there were several ways to interpret the results of the referendum.

He claimed that the referendum would still have resulted in nothing even if the question had been stated clearly.

"People told politicians that they are mature enough to understand when they are being sold a fake item," Traykov pointed out.

Bulgaria's former Energy Minister said that he had abstained from voting at the referendum.

He argued that the body of legal experts of ruling center-right party GERB had "reformulated the unconstitutional question of the Bulgarian Socialist Party (BSP) into a meaningless one."

He said that the people should have been asked whether they wanted the Belene N-plant or not and they should have been presented with sufficient information about the parameters of the project in advance.

Regarding the "last-minute" discovery of documents pertaining to the Benele NPP project directly before the referendum, he suggested that the stance of German RWE on the N-plant project had been clear since the beginning of GERB's term in office, including the disagreement of the strategic investor with the so-called Appendix 5 for purchasing equipment worth EUR 600 M and with the overall manner of conducting the negotiations.

According to preliminary results of the January 27 referendum on the development of nuclear energy in Bulgaria, a total of 60.55% voted in favor of the construction of a new nuclear power plant in the country.

With 97.14% of the votes counted, it emerged early on Monday that a total of 832 742 people had backed the potential construction of a new nuclear power plant, while 522 927 had voted against.

The referendum was invalidated by low turnout, as merely 21% of the eligible voters cast ballots .

As the turnout is over 20%, and more than half of the votes are positive, the question is to be returned to Parliament for further discussion.