Czech New President Milos Zeman: I am All Citizens' Voice 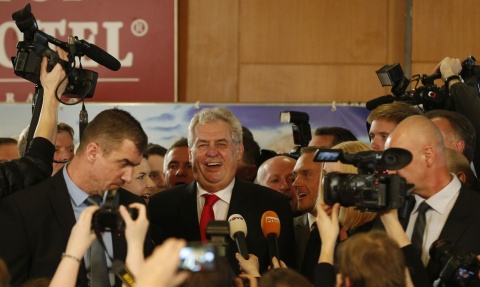 Former PM Milos Zeman smiles as he adresses the media, accompanied by his daughter, after preliminary results showed that he has won the Czech Republic's presidential election.

Former PM Milos Zeman, who won the Czech Republic's presidential election in a triumphant return to the big political stage, has promised to be president of all people in the country.

With all the votes counted, Milos Zeman won 54.8% of the vote for the largely ceremonial post, the Czech Statistics Office reported. His opponent, conservative Foreign Minister Karel Schwarzenberg, had 45.2%.

"Long live Zeman!" his supporters chanted at his campaign headquarters in Prague.

"I promise that as a president elected in a direct popular vote I will try to be the voice of all citizens," Zeman said.

Voters seemed to punish Schwarzenberg for the government's unpopular austerity cuts that aimed to reduce the budget deficit.

"It definitely didn't help me," Schwarzenberg said, adding he will continue to serve as foreign minister.

Czechs were electing the country's president in a direct popular vote for the first time, choosing a leader to replace euro-skeptic President Vaclav Klaus.

The new president will be sworn in the following day.

Zeman is a hard-drinking, chain-smoking politician, known for his witty put-downs of his political opponents while Schwarzenberg is a titled prince, 75 years old but wildly popularly amongst young, urban voters, BBC correspondent said.

In the early 1990s, Schwarzenberg worked as chancellor to the President Vaclav Havel, the leader of the Velvet Revolution that brought down Communist rule in 1989.

The new president will represent the Czech Republic abroad and appoint candidates to the constitutional court and the central bank, but does not carry much day-to-day power.