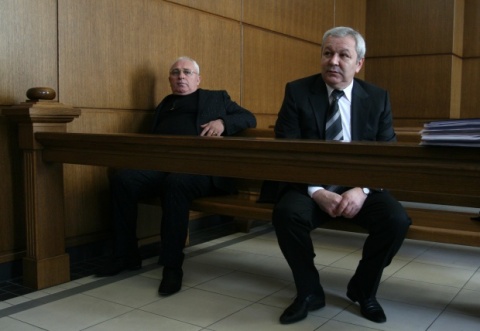 Gyunay Sefer (R) and Mithat Tabakov (L) from the ethnic Turkish DPS are facing trial for abuse of power and document fraud. Photo by BGNES

Legal charges against Mithat Tabakov and Gyunay Sefer, MPs from ethnic Turkish Movement for Rights and Freedoms party, have been officially logged with the Sofia City Court Friday.

The two are indicted with document fraud.

On October 19, 2012, now-former Chief Prosecutor Boris Velchev called for pre-trail proceedings against them and they gave up their immunity as MPs, thereby agreeing for criminal investigation procedures to be opened against them.

Under Parliament's rules of procedure, when MPs give up their immunity of their own free will, the step does not require the approval of the Parliament.

Sefer is a former District Governor of the northeastern city of Silistra and Tabakov a former mayor of the town of Dulovo.

Prosecutors say companies, linked to Gyunay Sefer, pocketed more than BGN 1.6 M from the state budget under five contracts for road repairs and the construction of two market places and a water treatment plant.

In committing the crime, defined by the prosecutors as document fraud and abuse of office, Sefer was assisted by Mithat Tabakov, a mayor of the town of Dulovo at that time, who signed the contracts for Sefer's companies.

The contracts were sealed in May, 2005. The prosecution says Sefer has built the above facilities only on paper.

Their names recently emerged in another scandal as active participants in the thrashing of the young man who attacked with a gas pistol ethnic Turkish leader, Ahmed Dogan at a party conference in Sofia.

Sefer has firmly denied the above, threatening to sue anyone disseminating such slander.

Gyunay Sefer and Mithat Tabakov were elected MPs during the latest parliamentary elections in the summer of 2009 on the ticket of the Movement for Rights and Freedoms (DPS) in the town of Silistra.

In October 2012, the Sofia City Court sentenced Mithat Tabakov to four years in prison for accepting an exceptionally large bribe.

Tabakov, in his capacity of mayor of the Dulovo municipality, was charged with accepting a sum of BGN 10 000 from the manager of Water Supply and Sewerage OOD in Silistra, Petko Gorbanov, in the period October 2004 – November 19, 2004.

Tabakov received the money on November 19, 2004 on his own bank account to sign a contract with the Water Supply and Sewerage company in the northeastern town of Silistra for the implementation of public procurement for water piping replacement and inspection in the village of Vokil.

Tabakov claimed that he had not been transferred a bribe but a loan to repair his car.

This is the second trial against the DPS MP.

In December 2011, the Sofia City Court sentenced Tabakov to five years of imprisonment over signing a damaging deal.

He was found guilty of criminal breach of trust by signing an unfavorable contract in his capacity of Mayor of the Municipality of Dulovo in 2009.

Tabakov is appealing the rules.