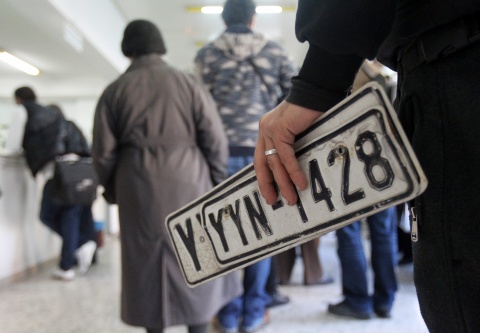 Locals are seen turning in their licence plates in the tax office to avoid paying the exorbitant car taxes, Athens, Greece, 28 Dec 2012 EPA/BGNES

From The Greek Reporter

They are born in Greece, live in Greece but that does not stop them from getting Bulgarian IDs and license plates for their cars, to avoid taxes in their country.

Neighboring EU country Bulgaria seems to offer the whole package: Bulgarian IDs and plates, low tax rates and exemptions from documentary evidence and emergency taxes, according to Greek daily Hmerisia citing evidence reported by Greek TV channels Antenna and Star.According to star.gr, there is a whole business running for the Greeks in Bulgaria.

Several offices have emerged specializing in how to steal from the Greek state. For instance, such businesses help Greeks owning luxury cars set up iconic companies to justify the possession of expensive mobiles against a small amount of money.

It is reported that already more than 10,000 cars owned by Greek citizens are circulating with Bulgarian license plates.

This tax evasion phenomenon is not a secret business for the few. One can easily find information on the internet, where dozens of advertisements run on issuing Bulgarian plates with analytic cost tables.

"Car trafficking in the Greek-Bulgarian borders is not controlled" said Dimitris Trimponias, president of the Federation of Greek Customs Employees and Officers, adding that he has repeatedly informed his superiors on the matter but no measures have been taken so far.

"Over the past three years, our Federation has informed the political leaders about the vast tax evasion, smuggling and illegal car trafficking, but nothing has changed to date. If the situation is to be changed, we must set customs in Promachonas, Ormenio and Eksochi to safeguard and control the flow of any goods between the two countries" pointed out Trimponias during his interview with the daily TV news show Proino Ant1.