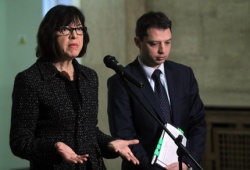 Bulgarians should say a resolute 'NO' at Sunday's referendum on nuclear energy, stated MEP Rebecca Harms, chair of the Greens/EFA political group in the European Parliament.

Thursday Harms is on an official visit to Bulgaria, where she had talks with Bulgarian PM Boyko Borisov and Minister of Economy and Energy Delyan Dobrev.

"I fully support the position of the Bulgarian cabinet, which has said it opposed the construction of the projected Belene NPP," stated the German MEP.

The January 27 referendum was initiated by a petition of more than 700,000 citizens, supported by the opposition Bulgarian Socialist Party, after center-right GERB cabinet decided to freeze the Belene NPP project in March 2012.

"By voting with 'No', you will be voting for the better future of Bulgaria," stated Harms.

"Those who want to build a NPP at Belene are leading Bulgaria to what happened in Fukushima," stressed the Green MEP.

According to harms, Soviet scientists back in the late 1980s, when the project was initiated, warned that the area of Belene is inappropriate for the construction of a NPP, posing a high earthquake risk.

The EU parlamentarian stressed, based on her research of the Chernobyl and Fukushima disasters, that nuclear energy is never safe.

"A Fukushima scenario is not to be precluded in the [currently functioning] Kozloduy NPP either," stated an emotional Harms.

According to the Green MEP, after Chernobyl and Fukushima, many countries have started thinking differently about energy and have begun to actively support the development of renewable energy.

She gave the example of her native Germany, where she said the renewables boom gave a boost to the economy and created 400,000 new jobs.

Thursday's Sofia visit of MEP Harms also included discussions with cabinet on construction in Bulgarian protected areas, which she said needs to be inspected on the EU level.