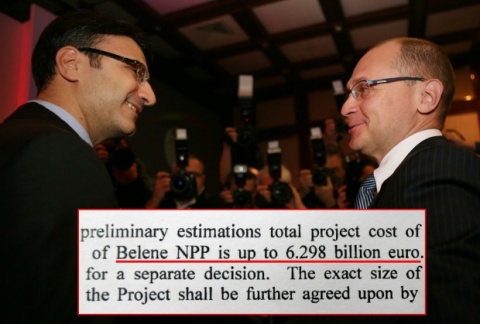 Bulgaria's Borisov Cabinet signed in November 2010 a memorandum with Rosatom fixing the price of the Belene NPP at EUR 6.3 B. Traikov is on the left and Kirienko on the right. Photo by BGNES

The Cabinet of Bulgarian Prime Minister, Boyko Borisov, has agreed on a price of EUR 6.3 B for the construction of a second Nuclear Power Plant in the Danube town of Belene.

The memorandum for it has been signed in 2010 by the Bulgarian National Electric Company, NEK, the Russian Rosatom, and the Finish Fortum.

The date on the document is November 30, 2010. The document was released Thursday by the Russian news agency RIA-Novosti, cited by the Bulgarian BGNES. BGNES further write they have a copy of the document.

On November 30, 2010, Sofia hosted a large nuclear energy summit, personally opened by Borisov. It was attended by Rosatom CEO Sergey Kirienko, representatives of the Finish company and many energy experts. The event was organized two weeks after the visit of President Vladimir Putin to Bulgaria, who was then Russian PM.

Kirienko announced on November 13, 2010, immediately after the joint briefing of Putin and Borisov, the Russian side had fulfilled one of Borisov's requests – to have a firm price for the future NPP.

The price was officially revealed at the energy summit on November 30 and the amount reported then was EUR 6.298 B. The same amount is listed in the memorandum signed in Sofia and released by RIA-Novosti Thursday. The signature for the Bulgarian side belongs to then CEO of NEK, Krasimir Parvanov. The ceremony has been attended by Traicho Traikov, who was at the time Minister of Economy and Energy in the Cabinet of the ruling Citizens for European Development of Bulgaria party, GERB.

Before the ceremony, Traikov had discussed the clauses in the memorandum in detail with Borisov for about an hour and the latter had given personal permission for its signing.

BGNES write the Bulgarian signature under the official document should bring an end to all speculations that Bulgaria has never been informed about the price of EUR 6.3 B, as Borisov and Traikov's successor, Delyan Dobrev claim, along with insisting the price was over EUR 10 B.