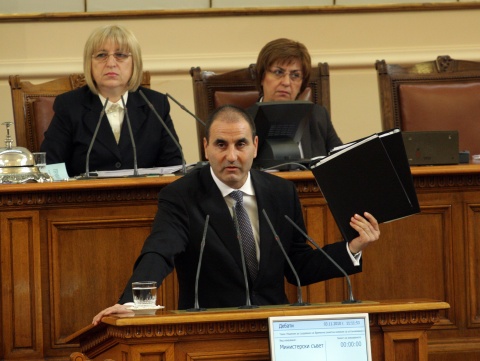 Bulgaria’s Deputy PM and Interior Minister, Tsvetan Tsvetanov, pledges the history book of the Communist State Security will be read to the last page. Photo by BGNES

The ruling center-right Citizens for European Development of Bulgaria party, GERB, is unwavering in exposing intelligence officers as agents of the Communist State Security, DS.

The information emerged Thursday from words of Deputy Prime Minister and Interior Minister, Tsvetan Tsvetanov, at a discussion in the Parliament on the Management of the National Security System Act.

Amendments to it, passed at the end of 2012, eliminated and removed the text postulating that ministers, Members of the Parliament, ambassadors, and mayors, among others, should not be subjected to probes for affiliation with DS if after July 16 1991 they held posts of unit and sector chiefs in military intelligence and intelligence agencies.

At the time, the left-wing Bulgarian Socialist Party, BSP, firmly opposed the amendments insisting they will affect and endanger 1 000 people, including some who are abroad and in countries with high risks.

The Socialists requested from the President to veto the Act, but he released the amendments to be published in the State Gazette where they appeared on December 27, 2012.

In the aftermath, the Committee's Chairman, Vladimir Toshev (GERB) informed he will request an emergency meeting with Tsvetanov for debating new amendments that would allow chiefs of intelligence agencies to be able to motivate refusals to provide information to the panel investigating the DS files about subordinates if this information can lead to breaches in national security.

On Thursday, Tsvetanov told the MPs he found it strange the issue is being raised now, after the amendments have been passed already.

He reminded the Act has been first approved in 2006 and the now eliminated text created grounds for abuses.

The Minister noted the latest changes would not threaten national security as the law still allows the investigating panel, known as the Files Commission, to not make public documents that pose danger to national security or the life of someone.

Tsvetanov declared the history book of DS must be read to the last page.