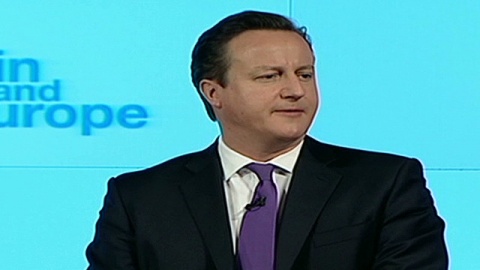 UK has been warned against 'cherry-picking' EU policy. Video grab by CNN

Germany and France have warned UK Prime Minister David Cameron that Britain cannot pick and choose EU membership terms in the wake of his pledge for a referendum.

French Foreign Minister Laurent Fabius said a future for the UK outside the EU could be "dangerous".

"We want the British to be able to bring all their positive characteristics to Europe... but you can't do Europe a la carte," he told French radio.

"Imagine Europe is a football club and you join, but once you're in it you can't say, 'Let's play rugby'."

French President Francois Hollande was clear about his desire to see the UK remain an EU member, his spokeswoman Najat Vallaud-Belkacem said.

"[But] being a member of the European Union involves obligations," she added.

German Foreign Minister Guido Westerwelle called for the UK to "remain an active and constructive" part of the EU.

He said: "We need a new commitment to the principle of subsidiarity.

"Not all and everything must be decided in Brussels and by Brussels."

However, the answer to the Union's economic troubles, Mr Westerwelle argued, was "more integration", not less.

"But cherry-picking is not an option," he added.

His opinion was echoed by Austrian Foreign Minister Michael Spindelegger, who said the EU could only succeed economically "if you pull together in the same direction".

Danish Prime Minister Helle Thorning-Schmidt was unimpressed with Cameron's speech, arguing that "a flexible Europe" already existed and Denmark - with its own EU opt-outs - was a good example.

Europe should not be a "help-yourself table", Politiken newspaper quoted her as saying.

The response from most European capitals is clear, the BBC's Chris Morris reports from Brussels - we don't want Britain to leave, but when you join a club, you have to abide by the rules.

If the British referendum does go ahead, it will be held by the end of 2017 at the latest.