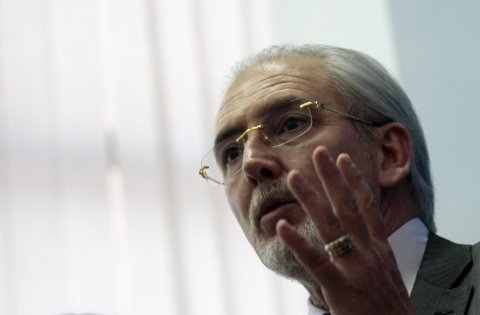 The new leader of Bulgaria's ethnic Turkish party DPS, Lyutvi Mestan (left), during his Tuesday's news conference on the attempted murder of his predecessor Ahmed Dogan. Photo by BGNES

The expert reports in the investigation of the attempt on the life of Bulgarian ethnic Turkish leader Ahmed Dogan have been marred by "overt political orders", according to Lyutvi Mestan, Dogan's successor as the chairman of Bulgaria's ethnic Turkish party DPS.

"We don't accept the expert reports that forced the Prosecutor's Office to reduce the charges against Enimehmedov from attempted murder to hooliganism," Mestan stated at a news conference Tuesday afternoon, shortly after the Sofia Regional Court left 25-year-old wannabe assassin in permanent custody.

According to the new DPS leader, the expert reports which concluded that Enimehmedov technically had no way of killing Ahmed Dogan with his gas pistol and the three bullets inside it, one of which was filled with pepper spray and the other two were blanks, have marred the entire investigation because they produced lighter charges.

Mestan has urged Bulgaria's Chief Prosecutor Sotir Tsatsarov to assign new probes to a European body, and threatened to consult a European forensic laboratory should the Bulgarian judiciary fail to do that.

Enimehmedov is charged with making a murder threat and hooliganism "characterized by particular audacity".

Initially, the Prosecutor's Office wanted to charge him with a murder attempt but the charge was later modified as it become know that with his gas pistol the young attacker technically had no chance of killing Dogan.

Bulgaria's Chief Prosecutor, Sotir Tsatsarov, and his Deputy, Borislav Sarafov, requested the strongest measure – permanent detention for Oktay Enimehmedov on grounds he might flee, hide and/or commit another crime, and for his own safety.