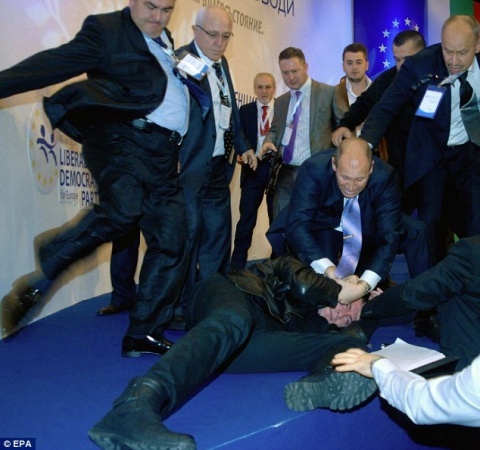 Most of the delegates of the ethnic Turkish party DPS, seen beating the man who attacked their leader Ahmed Dogan with a gas pistol, have been identified.

They are Taner Ali, Mayor of the town of Antonovo; Dzhamiset Dzafer, municipal councilor from the ethnic Turkish party Movement for Rights and Freedoms, DPS, in the second largest city of Plovdiv, and Mustafa Karadayi, Secretary of the DPS Central Operational Bureau.

Other thrashers include Ismail Kyuseyumer from the town of Momchilgrad and Kadir Mustafov from the city of Kardzhali.

Mustafov made headlines in 2010, when policemen in Kardzhali stormed his home in an operation against his son on grounds he was a pimp.

The site Faktor.bg cites sources from DPS saying that a representative of the Plovdiv’s Mufti Office, Ismet Kahraman and notorious Members of the Parliament, Midhat Tabakov, and Gyunay Sefer, also took part in the battery.

On Saturday, police in Bulgaria detained a man after he pointed a gun at Dogan  as he was delivering a speech in the capital Sofia. No shots were fired. The man was identified as Oktay Enimehmedov, a 25-year-old ethnic Turkish resident of the city of Burgas, with a previous criminal record for assault and theft.

Thousands of Bulgarians have united in outrage from live footage showing DPS delegates hitting with fists and kicking the young man, trying to pull his pants down and shouting "kill him," and "beat him." The footage also made international headlines.

The Facebook group demands for them to be legally prosecuted and fairly punished and have launched of a petition for the above.

Karadayi told the media in the aftermath that his reaction has been a pure instinct.

Oktay's brother, Metin, also demands legal prosecution of the thrashers. Metin has published several pictures of the beating, where he marked the main culprits.

They show Mayor Ali as one of the most active thrashers.

It emerged later that the prosecutor's office would seek legal sanctions against them.

It was also reported that Enimehmedov did not actually want to kill Dogan, but to scare him.