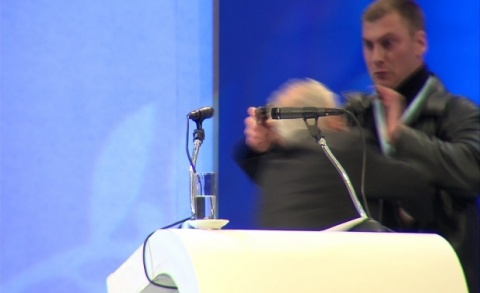 25-year-old Oktay Enimehmedov did not technically try to murder Ahmed Dogan, leader of Bulgaria's ethnic Turkish party DPS (Movement for Rights and Freedoms), according to Nedelcho Stoychev, Director of the Psychology Institute of the Bulgarian Interior Ministry.

According to Stoychev, the failed assassin technically had no possibility of killing Dogan with his gas pistol – a position already stated by Bulgarian Deputy Chief Prosecutor Borislav Sarafov.

"He primarily wanted to hurt him emotionally, not physically," Stoychev added, stressing that a potential shot from the gun in question would have caused "mild skin injuries" at most.

The criminal psychologist revealed that at first the investigators considered both versions – that Enimehmedov acted alone and that he was part of an organized crime group. Subsequently, however, they found that the attacker was really isolated and "closed in his own world" in the recent months.

"It turns out that he didn't tell anybody about his intentions. Nobody knew," Stoychev said.

"In his death note, he tried to soothe his mother, and tell her he is very sorry he wouldn't be completing his college degree. He wrote he was sorry he was about to do something that many people wouldn't approve of. It is a hand written letter," the psychologist elaborated.

In his words, Enimehmedov did not want to convey any ideas but to show what right as with his actions he wanted to demonstrate that Ahmed Dogan is wrong.

“He liked Dogan. He was disappointed by the fact that Dogan is not honest with his own people,” Stoychev said.

He further explained that as an ethnic Turk in Bulgaria, Enimehmedov was seeking an ideological foundation – checking out various political options including with the youth organization of DPS and the parties of former DPS dissenters Kasim Dal and Osman Oktay.

“Why is nobody asking the question why this young man went that way?” he asked. “His behavior is connected with the behavior of the political parties and political leaders. He wanted to give them a sign that they aren't doing the right thing. That was his way of doing that.”

Stoychev said Enimehmedov made the decision for the attack in the past few weeks. He recently attended the founding conference of the party Dogan's ex aide, Kasim Dal, where he had the chance to study the conference hall in question at the National Palace of Culture in Sofia.

“Enimehmedov did it publicly in order to make a demonstration. He is not sorry for what he did,” Stoychev added.