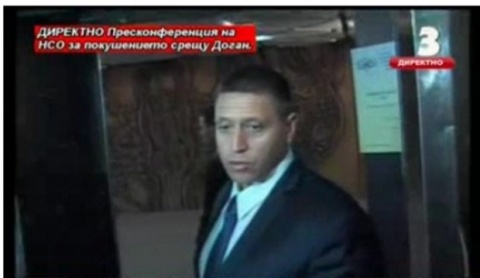 2 officers from Bulgaria's National Security Service have been injured while trying to cover and drag away the person who made an unsuccessful assassination attempt against Movement for Rights and Freedoms leader Ahmed Dogan.

This was revealed at a press event later Saturday evening by Security Service head Gen. Todor Kodzheykov, who said that one of the officers had possibly suffered a broken arm.

Kodzheykov stated that the two officers attempted to protect the assaulter from the delegates at the MRF congress, who had proceeded to mercilessly beat and kick him, after he made two ineffective attempts to shoot at Dogan during the event.

The Security Service head said that the agency was not formally responsible for organizing the security of the congress, its official duty being only the personal security of Ahmed Dogan.

Kodzheykov added that the Service is carrying out an analysis of exactly how the incident occured and whether there were any breaches in the work of officers at the location.

The National Security Service is a Bulgarian state agency devoted to bodyguarding senior Bulgarian statesmen and politicians who are believed to be under threat for their personal security.

Dogan, who has been chairing the Movement since its founding as a party in 1990, has been placed under the Security Service's protection.