Who Is Who: Assaulted Bulgarian Ethnic Turkish Leader Ahmed Dogan 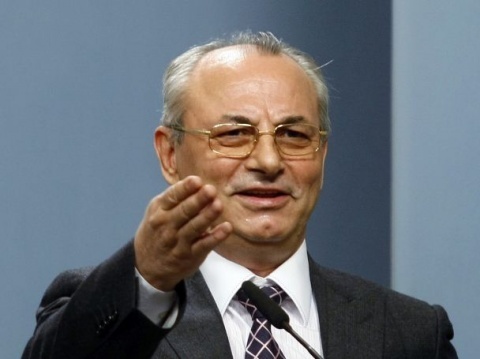 An unsuccessful attempt was made on the life of Ahmed Dogan, founder and leader of Bulgaria's ethnic Turkish party DPS (Movement for Rights and Freedoms), on Saturday, January 19, 2013, during a party conference in Sofia. Following is Dogan's profile.

Ahmed Demir Dogan was born on March 29, 1954, in the village of Pchelarovo in Northeast Bulgaria.

In 1981, Dogan graduated from Sofia University with degree in philosophy, and after a short academic career became he received a Ph. D. in Philosophy from the Philosophy Institute of the Bulgarian Academy of Sciences.

In 1985, Dogan completed a degree in the Social Sciences and Social Management Academy at the Central Committee of the Bulgarian Communist Party. The declassified files of the former communist regime showed that he was an agent and collaborator of the so called State Security (the secret police).

In 1985, he was among the founders of the Turkish National Freedom Movement that reacted against the so called "Revival Process" - a campaign by the Bulgarian Communist Party to assimilate the minorities by forcing the ethnic Bulgarian Muslims and Bulgarian Turks to adopt Slavic-sounding names.

Dogan headed the Movement in 1986 but was arrested. He was jailed in the prison in Pazardzhik, and in 1989 he was sentenced to ten years at a closed trial for being the organizer and leader of an anti-state organization.

After the fall of the communist regime in November 1989, Dogan was pardoned and released.

On January 4, 1990, Dogan set up the Movement for Rights and Freedoms (DPS) which is practically the party of the Turkish minority in Bulgaria.

Since the fall of the communist regime as the leader of DPS Dogan has been a member of every parliament, including the Seventh Grand National Assembly in 1990.

On October 8, 1991, 93 members of Bulgaria's Parliament asked the Constitutional Court to declare the DPS unconstitutional on grounds of article 11.4 of the Constitution which explicitly bans political parties "formed on ethnic, racial, and religious basis". On 21 April 1992, the Court rejected the petition, and affirmed the constitutionality of the DPS.

In 1992-1994, the formally technocrat government of Prime Minister Lyuben Berov was formed with the mandate of Dogan's DPS, the third largest political force in the 36th Bulgarian Parliament with 24 MPs. The government was also supported by the Bulgarian Socialist Party, which had 106 MPs in the 240-seat Parliament.

Dogan and DPS initially supported the government of the anti-communist Union of Democratic Forces led by PM Filip Dimitrov; with the UDF having 110 MPs, the BSP 106, and the DPS 24, the DPS held the "balancing position". In December 1992, the DPS withdrew its support from the Dimitrov government voting against it in a no confidence vote.

The DPS formed a government with the National Movement "Simeon the Second" (NMSS) which had 120 MPs, one short of an absolute majority. The DPS got two Ministers; the government served its full term.

In 2005, the DPS was third in the Parliamentary Elections with 12,8% (467 000 votes), and got 34 MPs. After complicated negotiations for two months, in August 2005, the BSP, the NMSS, and the DPS formed a government in which the DPS got 3 Ministers. The government was formed with the mandate of the DPS.

Ahmed Dogan became part of the Governing Coalition Council together with PM Stanishev and NMSS leader Simeon Saxe-Coburg. While not a formal government body, the Council would meet periodically to determine coalition policies to be implemented by the Stanishev Cabinet.

After the end of the term of the three-way coalition government in 2009, Dogan and his ethnic Turkish party got 38 MPs in the 2009 elections, and ended up in opposition. Dogan has ever since been investigated and acquitted on receiving a fee of BGN 1.5 M from the government as a consultant on the construction of the southern Tsankov Kamak hydropower plant. Even though it caused a public scandal, the case led to no criminal sentences.

Over the last decade, Ahmed Dogan and his party DPS have become notorious for using "elections tourism", i.e. bringing Bulgarian expats from Turkish origin back from Turkey with special buses in order to have them vote in the Bulgarian elections. Various media reports claim that it is involved in large-scale corruption schemes. Many of those are based on the notorious statement by the DPS leader himself, Ahmed Dogan, made in 2005, that the DPS had its own "rings of firms" that supported it with funding.

In 2005, the far-right and extreme nationalist Ataka party was set up largely feeding upon fears and rumors among the Bulgarian Society that the DPS was an instrument of Turkey's penetration and influence in Bulgaria.

A report in the 168 Hours Weekly in 2007 claimed that the DPS had funded the far-right Ataka party with BGN 1,6 M in order to use the rise of far-right nationalism in Bulgaria in order to rally its supporters.

Dogan has been notorious for hardly ever showing up to Parliamentary sessions. He has stated he used his time for more productive activities. Because of his absences, he has often been deprived of his MP salary.

In 2004, Dogan was awarded Bulgaria's highest medal, "Stara Planina I", for his contribution to "ethnic peace and democracy in Bulgaria". Three months later, Dogan returned the medal because of the intention of President Parvanov to award the same medal to Vasil Mrachkov, Bulgaria's former Chief Prosecutor during the so called "Revival Process".

Dogan has been married twice, and has two children - a boy, Demir, and a girl, Demet. Currently, he lives out of wedlock with Alten Alieva, a model.

Dogan has maintained a public image of a fighter for the rights of minorities, and for being a liberal and a centrist politician. He often speaks about supporting the democratic system in Bulgaria, about the Bulgarian "national idea", minority rights, and regionalism.

Elected MP on the DPS proportional representation ticket seven times including the 1990 elections for the VII Grand National Assembly.

1990-2013 - Member of Parliament from the DPS, elected on the proportional DPS ticket in every single Parliament since 1990