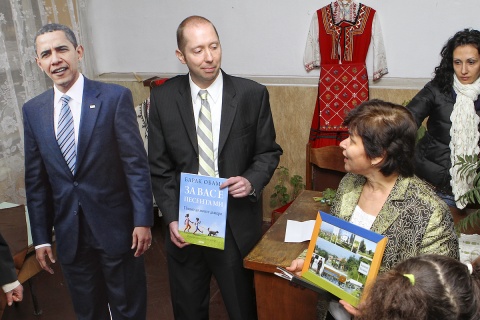 Barakovo Mayor Julieta Lazova (pictured below) and locals were more than happy to take a picture next to a life-size cardboard cutout of Barack Obama, together with US Embassy's Cultural Attach? Richard Damstra (R). Photos by US Embassy and 24 Hours daily

The residents of the tiny Bulgarian village of Barakovo had a new chance to show their support for the village's namesake – US President Barack Obama.

After hitting headlines with their heavy rooting for Obama reelection on the US election day, now they can take pictures with their arms around a life-size cardboard cutout of the president himself. The inspiring present was brought personally by the US Embassy's Cultural Attach? Richard Damstra.

The village of Barakovo, with a population of under 600, located at the foot of the Rila Mountain in Southwestern Bulgaria, hoped that incumbent US President Barack Obama will beat Republican challenger Mitt Romney on November 6, 2012, so that Obama can then visit Bulgaria, and stop at their village as well – obviously because of its name.

The residents of Barakovo even sent a letter to the White House inviting Obama to visit. The idea to invite Barack Obama to Barakovo belongs to a local resident, Stoyan Evtimov.

"Any such unconventional idea generates some positive emotions for the people," Evtimov explained.

Yhe village has even named a barbecue after Barack Obama. Subsequently, however, through a bureaucratic spelling mistake in the government offices, the name of the village was recorded as Barakovo, and remains so to this very day.

"We hope that you are going to visit us during your first official visit in Bulgaria. Your visit will be a great honor and joy for us," states the letter of the residents of Barakovo to Barack Obama.

The village has already received an automatic reply from the White House stating that its staff is unable to answer to each letter individually because of the large number of letters to the US President.