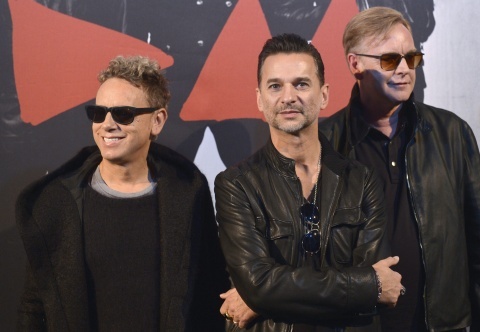 Depeche Mode, (L-R) Martin Lee Gore, Dave Gahan and Andrew Fletcher pose during a photocall before a press conference on their 2013 European Tour at the Gaite Lyrique venue in Paris. EPA/BGNES

Depeche Mode has changed the venue of their keenly awaited concert in Bulgaria's capital, which they included in their world tour this year.

The English band show in Sofia has been scheduled for May 12 and will take place at Lokomotiv stadium, not at Georgi Asparuhov stadium as initially announced.

The change in plans was prompted due to "unplanned repair works" at the initial venue.

The iconic new wave band's tour will kick off in Tel Aviv's Haraykon Park on May 7 following the April release of a new album, whose title is yet to be announced. The band will play 34 shows in 25 European countries.

The trek will be the band's first live shows since their 2009-10 Tour of the Universe, in which the band played 142 shows.

In the summer of 2006, Depeche Mode left over 35,000 Bulgarian fans breathless in a major Sofia gig, which also took place at Lokomotiv stadium.

A second concert in the summer of 2009 was axed after the band's efforts to reschedule the gigs, initially canceled due to singer Dave Gahan sickness, failed.