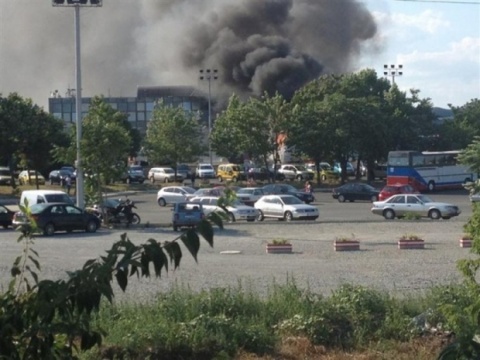 The July 18 terror attack, carried out at the Sarafovo Airport in Burgas, killed seven, including five Israeli tourists, the Bulgarian bus driver and a suspected suicide bomber. Photo by BGNES

The Bulgarian report about the July 18, 2012, terror act in Bulgaria's Black Sea city of Burgas is blaming the Lebanese Hezbollah for the attack.

The announcement has been made by the Israeli TV Channel 2 in the aftermath of news that Bulgaria's Foreign Minister, Nikolay Mladenov, has been on a secret visit to Israel.

No details of the meetings were forthcoming as Israeli and Bulgarian officials have declined offering any details.

A Bulgarian Foreign Ministry spokeswoman has only said the issue of the probe was discussed in the meetings. "Results of the investigation will be made public once it is completed and Bulgaria has enough evidence to back it up," she added.

The Israeli Channel 2 has further commented that Bulgarian Interior Minister, Tsvetan Tsvetanov, has also left the country to brief European leaders about the results of the investigation in the attack.

The Interior Ministry's press office reported Thursday that Tsvetanov was in Dublin for talks with European Union ministers and was expected to update Bulgaria's EU allies with the latest news.

The above is interpreted as a step ahead in the effort to have the EU declare that the attack was masterminded by Hezbollah.

The bombing at the Burgas Sarafovo airport killed 5 Israeli tourists, their Bulgarian bus driver and the perpetrator of the attack.

Channel 2 has informed that the Bulgarian report will be published in 5 days and that Europol have identified three of the four suspects in the attack. They have entered Bulgaria two and a half weeks before it and have used fake IDs.

Bulgaria's Foreign Minister Nikolay Mladenov had paid the surprise visit to Israel, in his own words, to help stop Iran's "nuclear armament without a war," as he told reporters in Jerusalem.

According to israelinationalnews.com Mladenov visited the Western Wall of the Temple in Jerusalem on Thursday.

During his visit, he told reporters that he came to Israel "to help oppose Iran so that it will stop its nuclear armament without a war."

"An attack on Israel is like an attack on Bulgaria and our friendship with you is firm and strong," Mladenov is quoted as saying.

The report further notes that Mladenov was moved by the prayer at the holy site and talked about the blossoming Jewish community in his country.