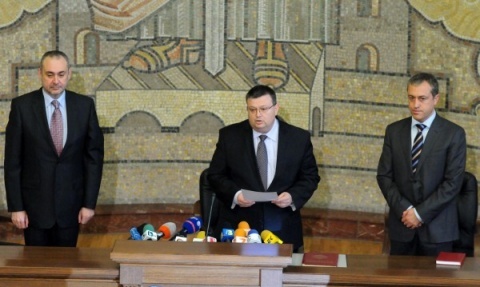 Pictured from left to right during the taking of the oath of the highest prosecutor's office in Bulgaria – former Chief Prosecutor, Boris Velchev, Sotir Tsatsarov, and Chief Investigator, Boyko Naydenov. Photo by Bulfoto

Bulgaria's newly elected Chief Prosecutor Sotir Tsatsarov has called upon citizens and politicians not to "abuse" the Chief Prosecutor's Office by overloading it with work.

Tsatsarov told reporters Thursday that the Prosecutor's Office has been forced to perform tasks that could have been elsewhere. He added that this tendency has been there for a while and would probably continue even after his 7-year term in office is over.

He asked the Supreme Judicial Council to approve the appointment of Penka Bogdanova and Borislav Sarafov as his deputies.

Bulgaria's highest juridical body, VSS, elected Tsatsarov on December 20 in a controversial and highly predictable move, believed to be orchestrated by the ruling GERB party.

Tsatsarov, up to now head of the Plovdiv District Court, won the position at the first round, with 18 votes "for", 3 "against" and 3 abstentions. He is believed to be close to Interior Minister Tsvetan Tsvetanov and Prime Minister Boyko Borisov.