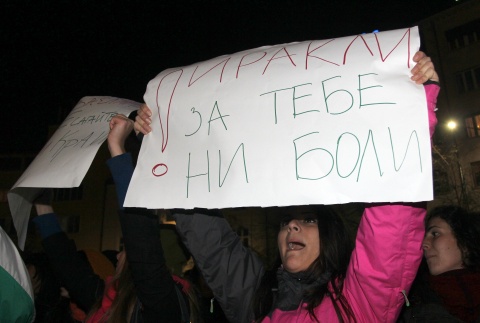 A Bulgarian eco protester pictured holding a poster saying, "Irakli, we are hurting for you!". Photo by BGNES

The Bulgarian authorities has slapped a BGN 20 000 fine on Emona 2000 EOOD, the developer which attempted and nearly managed to carry out resort construction in the Irakli – Emine protected area on the Bulgarian Black Sea coast, the Environment Ministry announced Wednesday.

The fine has been imposed on Emona 2000 EOOD because of discrepancies in the parameters of an Environmental Impact Assessment issued earlier to the firm by the ministry, and the construction permit of the firm for the Irakli beach will be terminated, the institution said.

On Monday, at the order of Bulgarian Regional Development Minister Lilyana Pavlova, Bulgaria's Construction Supervision Directorate inspected the site and found that Emona 2000 is building 14 detached houses and three storage facilities instead of the 12 houses that it got a permit for earlier.

The fine can be appealed by Emona 2000 in a seven-day period, with BGN 20 000 being the maximum possible fine that can be imposed on the firm by law for violating the parameters of an EIA.

In the wording of the ministry experts Irakli – Emona will not be granted the status of "protected territory" since that would be "unfeasible" and "useless".

Back in 2006 when a procedure is start to grant a protected territory status for Irakli, and then Environment Minister Dzhevdet Chakarov issues a moratorium on construction there, the developer, Emona 2000, appeals the decision. The appeal of Emona 2000 manager Dobrin Ivanov was rejected by the Supreme Administrative Court in 2007 because of the procedure that has been started under the Protected Territories Act.