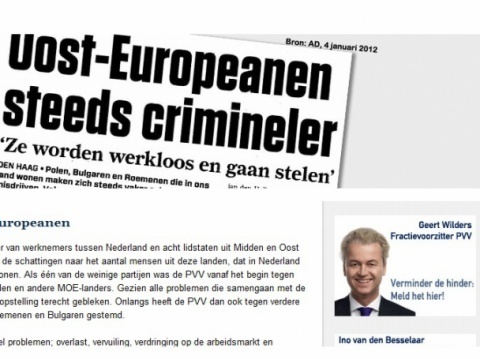 A close up view of a page of a website set up by the right-wing Dutch Freedom Party (PVV). File photo

Dutch daily NRC Handelbslad has reported a full failure for the controversial website created by the far-right PVV party of Geert Wilders.

According to the daily, the site has received 40 000 complaints against foreigners and 135 000 ones against its launch.

The publication comments that the influx of Eastern Europeans to the Netherlands cannot be denied, but stresses these emigrants usually take jobs that the Dutch snub.

In addition, the xenophobic site has offered opportunities to reflect on socializing these over 300 000 foreigners. The daily sees its launch as a turning point for media now focusing on the positive economic benefits from the expats' influx.

In March 2012, Dutch Members of the Parliament condemned the notorious anti-immigration website

On March 13, 2011, following in the footsteps of the Council of Europe, the European Parliament demanded that the Dutch government distance itself from the anti-immigration website, but Prime Minister, Mark Rutte, said then that he would refrain from comments because it belonged to a party, not to the cabinet.

Wielders' far-right, nationalist Freedom Party was part of the ruling majority, but it is now in opposition after the last general election in the country in September 2012.